A couple of weeks ago, CNBC’s Jim Cramer was asked by an emailer if he should liquidate his account at Bear Stearns. Cramer said:

“No! No! No! Bear Stearns is not in trouble. If anything, they’re more likely to be taken over. Don’t move your money from Bear.”

Shortly thereafter, Bear Stearns stock collapsed and the company was taken over by JP Morgan Chase. Cramer himself has been castigated and ridiculed for his response from many quarters, and now the Fox Business Network is piling on with a new ad: 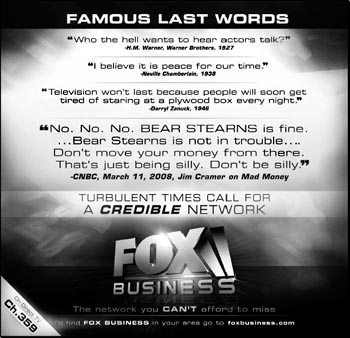 The only problem with the ad and other criticism is that Cramer was right. The critics are either being deliberately dishonest or they have a severe case of attention deficit disorder. The emailer was asking specifically about Bear Stearns’ liquidity and whether he should close his deposit account. He was not asking about the company’s stock value and Cramer’s response had nothing to do with that. Cramer correctly pointed out that the company’s depositors would be fine because the Federal Reserve guaranteed those funds and that the worst that would happen is that another firm would acquire them. That’s exactly what did happen.

But that hasn’t stopped Fox from publishing a deceitful ad that misrepresents Cramer’s advice. It’s actually kind of funny that the ad’s tagline is “Turbulent Times Call For A Credible Network.” Credible? You mean like a network that doesn’t lie in their advertisements? I think this would be a more appropriate ad: 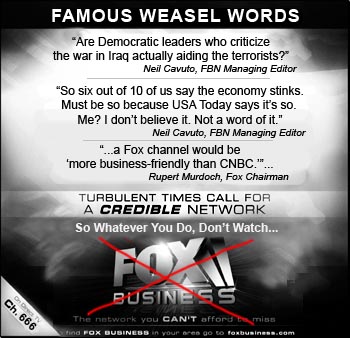 I’m no apologist for Jim Cramer. He has a pretty lousy track record on stock recommendations. And for a TV personality who behaves like a clown, he violates the most important rule for a clown – be funny! However, when he’s right he shouldn’t have to take heat from the likes of Fox – the network that, on their first day of broadcast, featured the “Naked Cowboy“ offering financial guidance.

For the Record: On July 13, 2007, FBN’s current Managing Editor, Neil Cavuto disputed reports of the economy’s weakness saying that he “[didn’t] believe a word of it.” Since then the Dow has dropped 1,469 points (10.6%), the mortgage market has thrown thousands into foreclosure, and now a financial powerhouse has been reduced to rubble. That’s the sort of credibility you can expect from FBN which calls itself: The Network You Can’t Afford To Miss. More like: The Network You Can’t Afford To Watch.