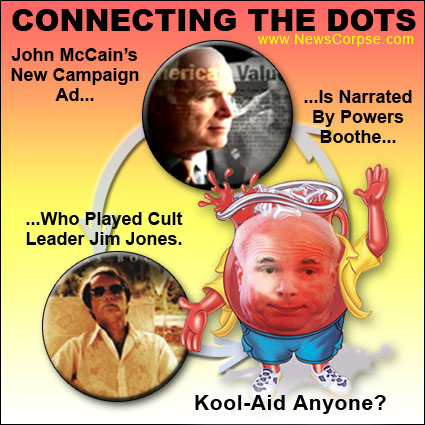 Was that McCain or Jim Jones? No matter. The ad goes on to ask, “What must a president believe about us?” John McCain believes we’re idiots whose views are irrelevant. When challenged on the state of the war in Iraq he harrumphes, “We’re succeeding. I don’t care what anybody says.” Then he yells at the kids to get off of his lawn.

Maybe we should appreciate his specificity, or maybe he just needs everything explained to him twice. He’s already confessed that he doesn’t understand important subjects like the economy or AIDS prevention, and he’s clearly demonstrated his ignorance of the Middle East. If he is the president Americans have been waiting for (which should read “the president for whom Americans have been waiting”), then we have seriously lowered our standards. Cue H. L. Mencken:

“As democracy is perfected, the office represents, more and more closely, the inner soul of the people. We move toward a lofty ideal. On some great and glorious day the plain folks of the land will reach their heart’s desire at last, and the White House will be adorned by a downright moron.”

I thought that applied perfectly to Bush, but McCain is rapidly becoming a contender.