After more than a year of stalling, John McCain is finally making his medical records public. However, the process by which he is releasing the data suggests that he hopes it doesn’t become too public. His campaign has chosen the Friday prior to the three day Memorial Day weekend for the document dump. Even worse, they are restricting access to the records to a three hour period wherein the reporters may take notes, but will not be allowed to take photos or make copies. That’s three hours to read and analyze 400 complex medical documents. The campaign also restricted the access to two newspapers, two wire services, and the national TV news networks. Prominent news organizations like the New York Times, Newsweek, the Wall Street Journal, etc., were not invited. Neither were smaller players like McClatchy, weekly newspapers, alternative press, or anyone from the Internet.

However, News Corpse has acquired some of the classified records that McCain hoped would remain secret. Below is an exclusive document leaked from McCain’s medical team: 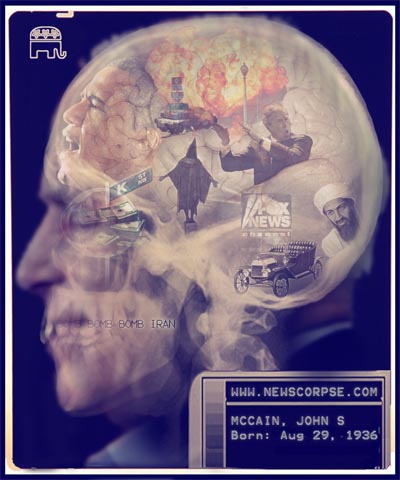 Following the release, McCain’s campaign declared that the records proved that he was in good health and fit for office. The evidence here may contradict that assessment by exposing McCain’s mental obsessions and deficiencies. His campaign manager, Rick Davis said of McCain that, “He defies all the rules of aging.” If he is referring to the accumulation of wisdom, reason, and judgment that accompanies maturity, I’m inclined to agree.

And anyone who objects to the raising of McCain’s age needs to realize that it is McCain himself who is making it an issue. He frequently refers to himself being “as old as dirt with more scars than Frankenstein.” He joked about it on Saturday Live. He even ruled himself out of a 2008 campaign back in 2000: