In one of the most repugnant expressions of heartlessness ever put forth by a major media enterprise, Keith Ablow, the Fox News psycho analyst, has callously come out in favor of making less fortunate Americans suffer in even greater measure. He is literally giddy over the prospect of inflicting more pain on people who have endured so much of it already. And at the same time he neglects any such sacrifice for our nation’s privileged and wealthy – like himself. 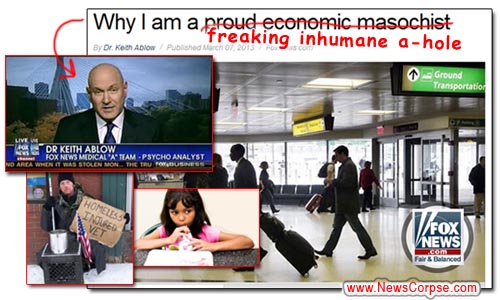 Despite labeling himself an “economic masochist,” Ablow would be more accurately described as a sadomasochist because he is advocating for others to experience pain along with his own. He sets the stage for this depravity with a tale of his inconvenience at the airport:

“I traveled from Boston to New York yesterday on the Delta shuttle out of Logan. The lines were especially long, and the wait to get through security was 30 minutes. It’s usually about 10 minutes at the time of day I was flying.”

Ablow explained that the extended delay was due to the elimination of overtime by the TSA as a result of the sequester budget cuts. Then we went on to say…

“My immediate reaction to the announcement that I should anticipate inconveniences at airport security wasn’t annoyance or worry; it was relief and resolve, about the short staffing. I felt good that budget cuts were being made and that I could feel them.

I liked the pain, because I am certain that our economy will not be righted without some discomfort–mine, included. I felt like my wait in line was showing some personal discipline in service to the public good.” […] “I am hoping for more pain from the Sequester.”

For a rich psychiatrist and television commentator to embrace the “pain” of waiting twenty minutes more than usual for his (probably first class) flight as some sort of patriotic sacrifice on the scale of Nathan Hale’s famous regret, makes a mockery of citizens who truly gave something of value for their country – like their lives.

Even worse, Ablow appears to be utterly unaware that the sequester’s impending cuts are going to disproportionally harm low income seniors and children, as well as the sick, the homeless, and veterans. Yet Ablow has the gall to call for sacrifice only on the part of those who are hurting the most and that those moochers ought to “not only anticipate pain, but welcome it.”

Nowhere in his screed does Ablow suggest that privileged folks like himself should participate in the “service to the public good” by paying a little more in taxes. He and his upper class comrades are the ones who have benefited most from the economic recovery of the past four years. The stock market is at an all time high and the rich, according to Forbes, are enjoying unprecedented growth while paying less in taxes.

In Ablow’s world only the poor and middle class are expected to sacrifice. He and his peers must be permitted to maintain the luxurious lifestyles to which they have become accustomed. And that lifestyle must be paid for by underprivileged kids, fixed-income seniors, and disabled vets. And still they have the audacity to congratulate themselves for magnanimously waiting a few extra minutes to get through airport security as if that were some sort of torturous act of heroism. You’d think he had been nailed to a cross. What a repellant pile of unadulterated douchebaggery.