In this edition of “So F**king What?” we are treated to a repulsive display of bigotry by the Islamophobes at Fox News. Their Fox Nation web site (renowned as world-class liars) saw fit to republish a story from the uber-conservative Washington Times that alleged that James Holmes, currently in prison for the Aurora, Colorado theater massacre, has converted to Islam. 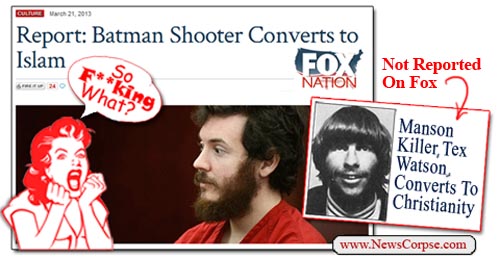 [Get your very own “So F**king What?” stickers here]

The story in the Washington Times was based on uncorroborated information from an anonymous source. The basis for the assertion that Holmes is now a Muslim is, according to the source, that “the beard James Holmes sported in court last months represents his new-found faith.” Were that the criteria, it would make everyone from Abraham Lincoln to George Clooney Muslim.

The first question any reasonable person would ask is “What difference does it make if Holmes did convert?” How would that change any aspect of his prosecution? The facts of the case are the same and the jury will decide the outcome based on the evidence and not (hopefully) on what religion he practices.

The point of this Fox posting is to malign Muslims by associating them with a mass murderer. The implication is that Holmes, by adopting Islam, validates what right-wing bigots regard as the heinous nature of the religion. They point to this news as proof that homicidal maniacs like Holmes have an affinity for the Islamic faith.

The problem with that shallow attempt at logic is that many more homicidal maniacs have converted to Christianity while in prison. They include murderers like Tex Watson of the Manson family and serial killer Ted Bundy. If conversion to a religion is to be regarded as an endorsement of criminal behavior, then Christians have a lot for which to answer.

The posting by the Fox Nationalists carefully edited the text from the Washington Times to exclude a paragraph that substantively altered the impression that the article would have. That paragraph said…

“[M]ost Muslim inmates are not happy with the convict’s new religion. ‘None of them condone forms of terrorism or extremism,’ the source added. ‘And they don’t want their religion to be connected to that awful shooting.’

Isn’t it interesting that that part of the article didn’t make it into the Fox posting? If it had, it would have been a lot more difficult for Fox Nation’s commenters to engage in a rabid feast of bigotry and hate. The majority of the comments expressed the belief that it was expected that a sicko like Holmes would be a Muslim. And some of the more creative cretins attempted to tie President Obama to the story, suggesting that he shared both the faith and the madness of Holmes.

Ultimately, that was the purpose of posting the story to begin with. It was an opportunity to bash the President and Muslims at the same time. For the editors at Fox it was the perfect alignment of politics and religion and they surely knew that their readers would slobber it up. There is one thing you can say about Fox: They do know their audience.

3 thoughts on “So F**king What? Fox News Bigots Falsely Tie Islam To The Aurora Theater Massacre”