So Fox News wants to be taken seriously as a credible news organization? If that’s true, then why do they keep destroying their own credibility with stunts like this: 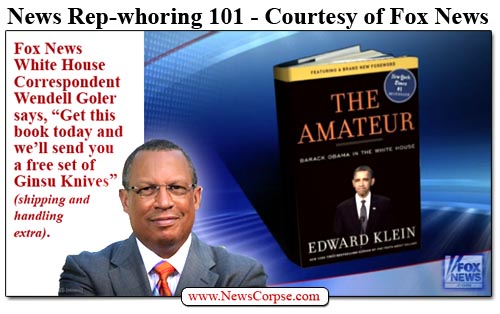 During the daily briefing yesterday, Wendell Goler, Fox’s White House correspondent, took the opportunity to ask press secretary Jay Carney if he would “comment on Ezra Klein’s book indicating that the President has agreed to support his former Secretary of State in 2016?” Carney answered that he was not aware of the book, and with good reason. Ezra Klein has never written the book that Goler described.

What Goler was apparently referring to was the book “The Amateur” by wackadoodle Obama-hater and Clinton conspiracy nut Edward Klein. Ordinarily, it should be a forgivable offense to verbally mangle a couple of similar names, but the problem here is that even if Goler had gotten the name right, it was an utterly inappropriate source to cite in the White House press room.

Ed Klein is a certifiable nutcase who has proffered some of the most inane theories and accusations this side of the Weekly World News. He is a proud and persistent birther. He alleged that Bill Clinton had raped his wife Hillary, whom he believes is a lesbian. All these fantastical delusions and more were advanced by Klein without evidence or named sources. His books have been denounced by critics across the political spectrum.

Nevertheless, this is the cretin who Goler actually intended to cite as his source for some secret deal between Obama and Clinton for future political office. That information by itself would not be particularly surprising, but Klein’s version comes complete with a bucket load of melodrama and personal animus between the parties.

What’s more, the book containing this news bite is more than a year old. It has only come back into discussion because this week marks the release of the paperback edition. So what we have here is Fox News raising the issue to support the marketing campaign of a year-old book that was ridiculed when originally released in hard cover.

It would be one thing if Fox merely had Klein on Sean Hannity’s program to discuss the book (which they did), but to feed this thinly veiled advertisement into the media via their primary White House reporter is unconscionable. It is demeaning to the reporter who now appears to be no more than a pitchman for a disreputable product. Nice work, Fox.