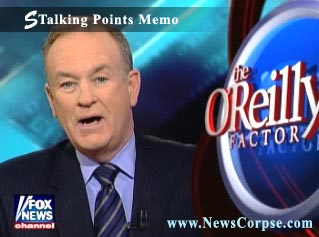 The Dixie Chicks arouse O’Reilly’s ire about the stupid, lazy, good-for-nothin “young’uns” in America. He’s apparently upset because they are so stupid that they would rather listen to the Dixie Chicks than to his pontificatious puke.

When Karl Rove picked Robert Novak to leak the name of a covert CIA operative, he got his money’s worth. Three days after an investigation into the leak began, Novak called Rove to promise that no harm would come to him as a result of their fling.

Rove testified to the grand jury that during his telephone call with Novak, the columnist said words to the effect: “You are not going to get burned” and “I don’t give up my sources,” according to people familiar with his testimony.

This might have been nothing more than a reporter assuring a source that his anonymity would be preserved. Except for the peculiar timing. Coming just a few days after it became known that an investigation had begun, the call could also have been an attempt to synchronize stories. Lawyers routinely advise clients who are witnesses to refrain from talking to other witnesses.

Either Rove and Novak were not getting legal advice or they were ignoring it. The motivation to do so would be compelling because they would be looking at charges of obstruction of justice and conspiracy to obstruct justice.

It’s surprising that under the circumstance, Novak is still a working journalist. But it is not surprising that he is working at Fox News Channel, where he landed after an embarrassing on air tantrum got him suspended at CNN.

The Baghdad bureau of the Voice of America closed six months ago when it’s last reporter left due to security concerns. Alisha Ryu asked to be transferred after an attack that killed a member of her security detail.

Iraq is the world’s most dangerous country for the media, with 69 fatalities since 2003. The closing of VOA is just the latest example how difficult it is to get reliable news out the country. The VOA could not say when there might be another reporter assigned to Baghdad but Ryu was quoted as saying that there were no volunteers.

Ryu has published stories detailing occurances of abuse and torture by Shiite militias in conjunction with Interior Ministry prison authorities. These reports may have targeted her for retribution.

While the VOA ostensibly operates independently, it is an arm of the U. S. government and is required by its charter to “present the policies of the United States clearly and effectively.” If they can’t keep the mood upbeat, I don’t see why any other news organization (other than Fox) can be expected to do so.

The Bush administration is fond of complaining that the media is ignoring all the positive stories in Iraq. It must be hard to ferret out all those postitive stories when you can’t even leave your hotel without getting kidnapped or shot at or killed. Jill Carroll, Bob Woodruff, and 69 disembodied souls can attest to that. If the environment is so dangerous that field reporters, an uncommonly sturdy bunch, can’t be recruited, it puts the lie to the administration’s lament that there is an abundance of good news that is just being missed.

American media has worked hard to earn it’s reputation as the lapdog of politicians and corporations. And how are they rewarded for their obedience? With threats of prosecution and incarceration should they publish any stories that contain classified information. Attorney General Alberto R. Gonzales, rolled up the newspaper and smacked the press’ nose when he appeared on “This Week” last Sunday.

“There are some statutes on the book which, if you read the language carefully, would seem to indicate that that [prosecution] is a possibility.”

Gonzales goes on to propose that there needs to be an accomodation between the right to a free press, and the government’s ability to “go after criminal activity.” How he arrives at that conclusion is unstated, but I think that most Constitutional scholars would agree that the Bill of Rights has precedence over a power-hungry prosecutor.

The danger in the Attorney General’s remarks is not merely the risk that prosecution poses for reporters, but the fact that the threat alone can frighten an already timid press corp from publishing any stories that might anger the Justice Department or the administration. And should prosecutions occur, what protections are in place to prevent them from being punitive or partisan?

At News Corpse we already believe that the media is dead. Now you will see how the dead react to being threatened with incarceration. They will, of course, just lie there.

Media Matters: From O’Reilly’s interview with Donald Rumsfeld on the May 19 edition of Fox News’ The O’Reilly Factor:

O’REILLY: Why do you think the left in this country is so anti-Iraq war? Why? Is it just the hatred of the president? Or is — do they see another pathway to fighting Al Qaeda?

RUMSFELD: This is not new. There has always been controversy.

That’s why, Bill. Did you really need Donald Rumsfeld to explain that to you? It’s shit like this that makes me want to root for global warming. 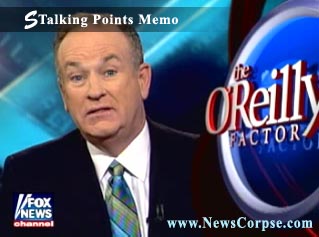 Mexico shocked Bill O’Reilly by making the outrageous request that it’s citizens not be subjected to rights abuses in the U. S. O’Reilly is now throwing his weight around with threats of boycotting Mexico. Are you getting hungry for some Freedom Tamales?

In the summer of 2001, New York Times reporter Judith Miller was investigating the aftermath of the bombing the U.S.S. Cole. She had early information that Al Qaeda was involved and sought to find out more about the connection. In the course of the investigation, a source revealed to her that Al Qaeda operatives were planning something even bigger.

She didn’t write the story and the Times didn’t publish any mention of it.

After the attacks on 9/11, Miller knew what she had uncovered months earlier. In an interview with Alternet, she says that, after the second plane hit the Towers, she cried out, “It’s Al Qaeda!.”

Miller and the Times had their reasons for not publishing a story that they deemed incomplete. There were many details that Miller was unable to ascertain or confirm. But the story tells us much about where the intelligence community stood in the months preceeding 9/11.

Miller’s source, whom she describes as impeccable, told her of a conversation between two Al Qaeda operatives that was intercepted by, she assumed, the National Security Agency. The operatives were discussing the Cole bombing and that…

“they had been talking to one another, supposedly expressing disappointment that the United States had not chosen to retaliate more seriously against what had happened to the Cole. And one Al Qaida operative was overheard saying to the other, ‘Don’t worry; we’re planning something so big now that the U.S. will have to respond.'”

These recollections from Miller tell us three extraordinary things.

What we knew.
The U. S. intelligence community knew more about the impending threat of Al Qaeda than they are presently acknowledging. Miller describes a tense environment in Washington with nervous agents waiting for the next shoe to drop.

What Al Qaeda wants.
The stirring revelation that Al Qaeda was disappointed by our lack of response illustrates that what Al Qaeda has been interested in all along was provoking us into a larger conflict. Their hopes were dashed by the Clinton administration but were finally realized when Bush came to power. Bush, in effect, gave them what they wanted: respect, publicity, recruitment posters and coronation as the pre-eminent defender of Islam.

What the media does, and doesn’t tell us.
Despite some holes in the story, the information that Miller had from trusted sources was significant enough to publish. The public exposition of the facts that were available could have led to further investigations and sources that might have filled in the gaps.

It is an act of indescribable irresponsibility to have withheld this story. What was going through the minds of the editors at the Times? Did they think that an intercepted conversation between the perpetrators of the Cole bombing, wherein they revealed plans for an even bigger plot, was not newsworthy? And what exactly did the NSA do with the intelligence gleaned from these intercepts?

So many questions. So many lives lost. If only people would do their jobs. It really doesn’t amount to much more than that. But at least Miller is regretful.

My Stalking Points Memos have achieved some measure of popularity. Unfortunately, that has increased my bandwidth usage to the point where I was knocked offline.

I have increased my bandwidth capacity temporarily to get back online, but it ain’t cheap. So I will be exploring alternatives including hosting the video elsewhere. If anyone has any suggestions or offers, please email me at the link at the bottom of the page.

Of course, you can always help to support News Corpse by purchasing products at Crass Commerce. I have note cards, magnets, magnet cards, coasters, and the notorious George W. Bush Voodoo Doll. I should have t-shirts and other apparrel within a couple of months. Feel free to browse the site but allow me to suggest to this audience, the Political gallery.

Thanks for your patience and your support.

If you aren’t already disturbed enough by the warrantless wiretapping and data collection the National Security Agency is engaging in, then fasten your seatbelt – it’s getting worse.

ABC reporters Brian Ross and Richard Esposito, were informed by a source that it is, “time for you to get some new cell phones, quick.” This warning, given in person, revealed that the government was tracking phone numbers connected to the reporters. By cross-checking those numbers within the massive database they’ve compiled, it would be possible for the government to learn the identity of whistleblowers and other anonymous sources. This should open the eyes of those who have defended the NSA program because it was merely collecting data, not listening in.

News Corpse was founded on the premise that the media is dead. How much more evidence do we need? It is impossible to maintain a free press if reporters and their sources are unable to communicate because they fear the government is monitoring them. Just announcing that such a program exists will scare off most of those who have knowledge of misconduct or crimes committed by government officials. And as sources dry up, corruption will bloom.

While the media may be dead, this intrusive and repressive government is very much alive. What is it going to take for the American people to become sufficiently outraged to demand that their leaders honor the Constitution? Freedom of the press is supposedly guaranteed by the First Amendment, but this administration doesn’t care about that. Do the American people care? 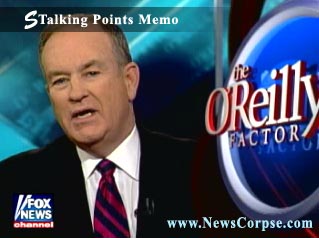 The National Security Agency is collecting data on the phone calls of every American as part of their “Terrorist Surveillience Program”. Apparently, we are all suspects. But Bill O’Reilly doesn’t care.