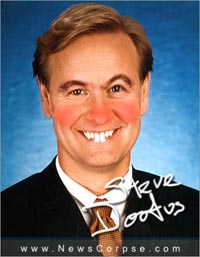 Steve Doocy, unquestionably the stupidest man on Fox News (which is no easy achievement), expressed his astonishment that George Soros might be executing an insidious plot to Jiu-Jitsu Fox News by turning its own wealth against them. Here are excerpts of an exchange this morning between Doocy and right-wing crank/author Ron Arnold:

Doocy: Did you know that George Soros made over $2.3 million by investing in News Corp, which is our parent company? So, is he using those profits to attack Fox News? Some people are wondering that.

By “some people” Doocy means himself and his producers. Arnold took up Doocy’s question and responded precisely as he was expected to when they invited him into the studio:

Ron Arnold: That’s absolutely true. Over a period of about four years the Soros Fund Management had about $4 million at one time, ended up with about $2.3 million when they sold it off. And now they’re simply using the cash to try to get rid of News Corp’s Fox News. And that’s exactly what’s happening.

Just to be clear, Soros is being accused of parlaying a $4 million bit of a $20 billion fund (that’s 0.002%) into a windfall with which he could blow away Fox News. That’s not much more than a rounding error. The accusation also implies that the fund itself is bankrolling the Fox attacks and not Soros personally (who could write a million dollar check on his own account like most of us pick up a Venti Latte with extra foam). There is no evidence that Soros’ Quantum Fund, or any other investment, has engaged in any such partisan expenditures, and probably would not be permitted to do so. What’s more, the $2.3 million cited as the proceeds from the sale of News Corp stock appears to represent a loss of principle, not a profit as Doocy stated. But Doocy’s Fox & Friends have no use for trivialities such as facts while they are trying to fabricate a scandal. Doocy continues…

Doocy: It looked like George Soros was trying to control the media.

Saints preserve us! An international billionaire financier might actually be trying to wield tyrannical control over our free press. I wonder if Doocy has ever met his boss, Rupert Murdoch, an international billionaire who actually does run a media empire and sits on the board of the Associated Press. Soros, on the other hand, has no management interests in any media concern. He has made some charitable donations to NPR and Media Matters, but has no executive role or even a seat on their boards. However, even if he did, is it Doocy’s contention that NPR and Media Matters constitute a mortal threat to News Corp, AP, and the rest of the Corporate Media cabal? Apparently so.

Arnold: Well, he certainly was. And you’ve got to remember he’s got a very good friend in the Tides Foundation’s CEO whose name is Drummond Pike. They go back a long way, Soros and Pike. And I’m pretty sure that the only reason that that million dollars went to Media Matters was because Drummond Pike stepped in. Because Media Matters has been trying to get money out of Soros for years. He said no.
Doocy: It just seems incredulous [sic] that he would be making money in News Corp stock and then turning around and taking the money to try to run a division of News Corp out of business.
Arnold: Yes, it does seem incredible but you have to remember, cash trumps hypocrisy. It’s all about the money as far as he’s concerned.
Doocy: That is a crazy story.

Now follow this logic: Soros didn’t even want to fund Media Matters. He was persuaded to do it by his pal Drummond. Yet he is still portrayed as seeking to control the media despite his lack of interest. And while Doocy and Arnold find it incredible, they explain it away by asserting that “It’s all about the money,” which contradicts their whole theory as to Soros’ obsession to dominate the media. That is indeed a crazy story.

Of course I didn’t expect any of this to make sense from the beginning. Doocy’s Olympian ignorance pervades every subject he approaches. The truth is that this just a teaser for Glenn Beck’s upcoming “Puppetmaster” special on Soros. Fox News is a focused and effective marketing machine and they always go to great lengths to promote their own phony stories. Doocy is like the teaspoon of Aspertame before the full-on dose of poison that Beck will dispense tomorrow.