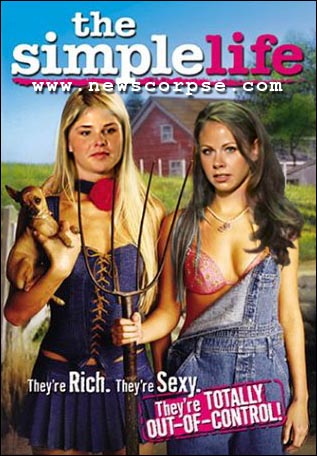 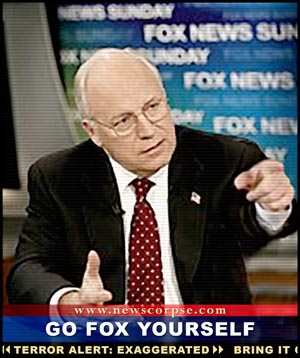 Vice-President Dick Cheney, complaining that the liberal media is once again reporting distortions about him, explains that he never told Senator Leahy to go fuck himself. He actually was suggesting that the Senator might enjoying viewing programs on the Fox cable network.

Our nation began as an ambitious experiment in democracy that was bound to face many challenges. Chief among those is that, in order for a government to be directed by its citizens, the citizens must be educated and informed. In recent years, this phase of our experiment has hit a wall. We have many problems facing us: economy, war, education, environment, trade, poverty, healthcare, etc. Many of these problems persist through generations without developing a consensus for resolution.

What makes it so difficult for us to even make progress?

There is a great division amongst our people. By this I do not mean the much editorialized rift between political adversaries. Ideological differences have always existed in our society. If these differences by themselves were enough to forestall solving society’s problems, then we would have to expect that we would never solve any problem. The true divide is the one that separates all the issues from each other. While the issues we face may appear to be a chaotic jumble of unrelated matters, they actually share a common gene and when considered as a whole take on new dimension.

The genetic thread that ties together our failed attempts to address our problems is the absence of a responsible and independent media that would enable us to stay informed so that we could make the important decisions that we face. This includes decisions on policy issues themselves as well as decisions about those who would represent us as state and federal legislators and executives. In a modern, media-driven society, we depend more than ever on the press to do its job. They must be probing and fair. They must report what our leaders tell us, but they must also do their own investigations to compare to what they have told us and to reveal what they have not.

Why is the media failing to do its job?

Where there once was a diverse and independent community in American media, there is now an incestuous family of a few giant corporations. Where there was once a wall between honorable journalists and the subjects they cover, we now have network news operations that are owned by corporations that have interests in government, government contracts, and public policy. The news providers that we depend on to report objectively on our nation’s institutions are owned by conglomerates that are the benefactors and beneficiaries of those institutions.

In the 2004 election cycle, media affiliated PACs contributed about 8 million dollars to political campaigns. Between 1996 and 2000, media firms and trade organizations spent $111 million on lobbying Congress. Their investment recently netted them a deal that raised the TV station ownership cap to 39%. As it happens, that was just enough to allow Viacom and News Corp to keep all their current stations, which exceeded the previous cap. Since 1995, the number of companies owning commercial TV stations has declined by 40%. These media conglomerates fund our representative’s campaigns, lobby them generously, and collect the spoils via favorable legislation and regulations. How then can we expect objective reporting from such a self-interested community of journalists? Add to this mix the corporate mission and its insatiable appetite for ever-increasing profit. What you get is a media culture that round-files significant stories that reflect negatively on its patrons and promotes sensational stories that goose ratings and ad revenue. Since there is usually no financial incentive to produce hard-boiled investigative reporting, we won’t be seeing much of that.

Thomas Jefferson said, “I would rather have a free press and no government, than a government and no free press.” He understood the value of having diverse and independent sources of news and information. When those sources are narrowed to a few polarizing voices, the result is a poorly informed, even misinformed, electorate. For instance, heavy viewers of the Fox News Channel are nearly four times as likely to hold demonstrably untrue positions about the war in Iraq as those who rely on National Public Radio or the Public Broadcasting System.

The 18th century British statesman, Edmund Burke, first referred to the press as “the 4th Estate” by observing that “there were three Estates in Parliament, but in the Reporters Gallery yonder, there sat a 4th Estate more important far than they all.” Burke was referring to the power that journalists had to act as a check and balance to the other estates: the Lords, the Commons and the clergy. The most dangerous threat to entrenched powers in a democracy is an informed electorate. The 4th Estate is the embodiment of that threat. Therefore, the media had to get whacked. It’s not personal, its just business.

The New York Times addresses an interesting question with regard to news staying “fresh”.

With such saturation coverage, news gets used up faster, decaying rapidly into what Russell Baker calls “the olds.” Public curiosity, let alone the public interest, is exhausted, and the mass media are quick to look for some new sensation even if that means leaving important issues unresolved.

They may be on to something. However, the opposite can also be observed as some stories, of relatively trivial nature, can get stuck in the cycle long after their usefulness as news has expired (i.e. Condit/Levy, Britney’s marriage, etc.)

USA Today reports on the under-representation of minorities in the the media and its impact on content and quality of the news we read.

Here’s an outstanding example of a story that has enormous implications for our domestic war on terror, but that gets little play in mainstream media.

Plame’s identity as a CIA operative was alledgedly disclosed to the media by White House staffers and an independant counsel has been appointed to determine how this came about and if any laws were broken. It is a violation of the law to break the cover of covert operatives and suspicion has fallen on Vice President Cheney’s chief of staff, Lewis “Scooter” Libby.

National security issues are certainly in play when CIA personnel identities are compromised. It not only has an obvious effect on the person involved, it also risks revealing sources and methods that can harm operations and other people known to associate with the outed agent. But courts forcing reporters to reveal their sources presents a sticky situation for first amendment advocates and must be dealt with carefully. In this case, however, it could be argued that this is not a case of a reporter and his source, but a political propagandist planting a story with a press accomplice in violation of the law.

The first amendment is on shaky ground in Sin City as “…singer Linda Ronstadt not only got booed, she got the boot after praising filmmaker Michael Moore and his new movie “Fahrenheit 9/11″ during a performance.”

And if it isn’t bad enough that the events in this story demonstrate a disdain for free expression, there is an element of “blame the victim” behavior as well.

Ronstadt’s comments drew loud boos, and some of the 4,500 people in attendance stormed out of the theater. People also tore down concert posters and tossed cocktails into the air.

So a bunch of intolerant and disrespectful audience members engage in acts of vandalism and the Alladin punishes the artist who is the victim of their criminal behavior.