Bill O’Reilly is very upset about what he asserts is escalating violence at political events. And as usual, he blames it all on out-of-control liberals who are terrorizing the nation. Yes, liberals – you know, the people who are always advocating for peace, oppose the proliferation of guns, and look down on the use of physical hostility as a means of conflict resolution. Those liberals.

However, nowhere in his tirade does O’Reilly acknowledge that most of the violence at political events this year has been perpetrated by supporters of Donald Trump inside his own rallies. Nor does he mention that Trump himself has encouraged the violence and even offered to pay for the legal defense of those who engage in it. Furthermore, Trump has also virtually solicited his supporters to riot if he is not given the Republican nomination at the GOP convention in July. 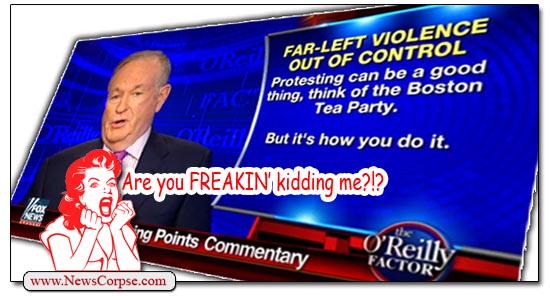 But O’Reilly isn’t against protest in principle, and to drive home that message he brings up an historical example of what he regards as the proper way to engage in peaceful protest: The Boston Tea Party. That’s right, O’Reilly leads off his commentary by saying “Protesting can be a good thing, think of the Boston Tea Party. But it’s how you do it.” So apparently O’Reilly thinks that the way to be a good protester is to dress up in disguises that will implicate other innocent people for your crimes, trespass on the property of your opponents in the dead of night, and destroy a million dollars worth of their products. Can you imagine O’Reilly’s reaction if somebody actually did that today?

That was the introduction to O’Reilly’s rant about how “far left violence is out of control in America,” and how liberals are responsible for it, but as for supporters of his BFF “Certainly some voting for Donald Trump are protesting, but they are using the ballot.” To make matters worse, O’Reilly talked about the point at which “a political movement becomes destructive,” and used as an example an incident at an after-party following the White House Correspondents Dinner. O’Reilly’s characterization of the affair cast the Huffington Post’s Ryan Grim as “a far left zealot who hectored” O’Reilly’s stalker/producer, Jesse Watters, and “provoked a physical confrontation.”

After spending the next few minutes defending himself against charges that he blamed a rape and murder victim for the attack that she suffered, which he did (see the Amanda Terkel link below), O’Reilly returned to the WHCD after-party skirmish and whined that “this Grim character had no business bothering Jesse Watters about anything, but that is what the far left does.”

Seriously? Bill O’Reilly is complaining that it’s the left that bothers people by citing what happened to his own henchman who is best known for bothering people with his disgraceful ambush attacks. He further alleges that it was Grim who provoked the confrontation by simply doing what Watters does for a living. And if O’Reilly’s desperate obliviousness to the historical record of his own program isn’t bad enough, Watters himself joined in saying…

“I was just at this party trying to enjoy myself. This guy comes up to me with a camera phone. I don’t even know who this guy is. He starts putting it my face. I was friendly at first. And he started getting a little obnoxious and, you know, things happened.”

Watters is literally outlining his own tactics that he uses to ambush others. He approaches them with a camera, fails to identify himself, gets in their face, and acts obnoxious. And he doesn’t even realize what he’s saying or how well he’s describing himself. O’Reilly then asked Watters to confirm that he never hit Grim and Watters said that he hadn’t, but he failed to say that he grabbed Grim’s cell phone and threw it across the room and when Grim retrieved it and continued with the video, Watters grabbed the phone again, put it in his pocket, and refused to return it. That assault and theft is what provoked the confrontation.

Notice that none of the nonsense that O’Reilly and Watters spewed had anything to do with an actual protest. It was a personal encounter at a party for elites that went wrong. In reality, O’Reilly’s protest diatribe was just an excuse for him to bring up the incident with Watters, defend his boorish behavior, and bash Grim for the crime of giving Watters a taste of his own toxic medicine, which Watters clearly couldn’t handle. In other words, it was a lame attempt at self-promotion and rationalization of flagrant assholishness. Well, to be fair, that’s pretty much the content of every O’Reilly program.

Here is an account of the WHCD after-party by the victim of Watters’ stalking, Huffington Post writer Amanda Terkel. And here also is the video that Ryan Grim took of Watters assaulting him:

Whenever Bill O’Reilly has some dirty work to do that doesn’t involve a loofah, he sends his trusty minion, Stuttering Jesse Watters. In the field, Watters pretends he is the progeny of Mike Wallace (whose real progeny, Chris, is also a Fox News toady). Watters plots elaborate ambush “interviews” with people who wouldn’t otherwise get within spitting distance of him, or O’Reilly either for that matter.

This past weekend, Amanda Terkel of ThinkProgress was literally stalked by Watters while she was on vacation.

Terkel: Watters and his camera man accosted me at approximately 3:45 p.m. on Saturday, March 21, in Winchester, VA, which is a two-hour drive from Washington, DC. My friend and I were in this small town for a short weekend vacation and had told no one about where we were going. I can only infer that the two men staked out my apartment and then followed me for two hours.

This harassment was orchestrated by O’Reilly as payback for Terkel’s reporting on O’Reilly’s appearance before the Alexa Foundation, a rape victims support group. It was a personal assault that had no news value, just the desire to harm someone he believed to be an enemy. The action taken against Terkel violated even O’Reilly’s criteria for ambushing:

O’Reilly: [W]e do not go after people lightly. We always ask them on the program first, or to issue a clear statement explaining their actions.

However, Terkel was never contacted for either a statement or an invitation to appear on the Factor. This is typical O’Reilly behavior. Remember, this is the same guy who pushed an Obama aide and threatened him not to “block the shot.” He is a textbook bully, as well as a paranoid narcissist. Dispatching so-called “producers” to harass people you don’t like is closer to organized crime than to journalism. Perhaps O’Reilly and Watters could be prosecuted under the RICO statutes.

Update: O’Reilly’s segment with the Watters ambush just aired and it was a stunning piece of sensationalistic, libelous, garbage. The encounter with Terkel, whom O’Reilly branded a villain, was edited so as to paint a thoroughly dishonest picture of her, while permitting Watters to spew a running commentary of vile character assassination. Then O’Reilly took a cognitive leap to turn his fire on Jeff Zucker, CEO of NBC, without explaining what he had to do with any of this. Clearly, O’Reilly just wants to take every opportunity to bash NBC as a proxy for his nemesis, Keith Olbermann, who also had nothing to do with this.

Also notable in the segment was O’Reilly’s description of the rape trial for the perpetrator of the crime committed against Alexa Branchini, for whom the Alexa Foundation was created. O’Reilly said that the defense put on a case intended to “prove the rape was consensual.” That is, to say the least, a curious phrasing. He did not refer to whether the “sex” was consensual. It appears that O’Reilly thinks that sometimes a rape victim may have consented to being raped, or was otherwise responsible. And that is precisely what Terkel noted in the article that started all of this – that O’Reilly was an inappropriate speaker to a rape victims organization because of his previous insensitivity for implying that some victims are responsible for bringing about their own assault. Somebody needs to tell O’Reilly that rape is NEVER consensual.