The hate-filled rhetoric of Donald Trump long ago crossed the line of decency. The record of his overt racism, rancid misogyny, and puerile insults is well documented. He regularly employs a form of vile demagoguery to incite his glassy-eyed disciples into fits of fury. And today he extended his campaign of bullying tactics to an explicit call to violence. 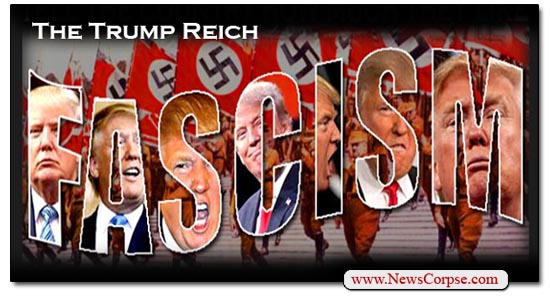 At his final rally for the Iowa caucus, Trump addressed the crowd to encourage them to go to their neighborhood caucus and support his candidacy. During the speech he veered off subject to announce that his security was on the lookout for hecklers. Then, assuming his phony facade of machismo, he issued this directive to the jackbooted thugs that make up his audience (video below):

“If you see somebody getting ready to throw a tomato, knock the crap out of them would you? Seriously. Just knock the hell…I will pay for the legal fees. I promise.”

That is literally the same message that was often sent to supporters of Nazis in pre-war Germany. Protesters were frequently subjected to beatings with the encouragement of the Party’s leaders. This is something that Trump must regard as a model for his brand of American supremacy.

However, there are a couple of problems with that theory. First of all, it is illegal to incite violence in this country. Trump’s exhortation to such brutality is well outside the bounds of the law. And what’s more, he knew it when he said it. That’s why he added his assurance that he would cover any legal consequences of the unlawful behavior. That offer of indemnity is evidence of unlawful intent as well as malice aforethought. Even worse, it is also a solicitation to commit a crime. If anyone ends up getting hurt, Trump should face both civil and criminal charges.

This isn’t the first time that Trump has goaded his followers into committing acts of violence. On prior occasions he has threatened hecklers by shouting commands from his podium to “get them the hell out of here.” He justified beatings after the fact saying that the protester “should have been roughed up.” He even advised his supporters to assault a protester saying “Confiscate his coat,” adding “You know, it’s about 10 degrees below zero outside.” That’s an unambiguous acknowledgement of intention to cause harm.

This is simply unacceptable in a civilized society. Donald Trump’s bullying and vulgarity is not only illegal, it’s an embarrassment to decent Americans. And yet he is the leading candidate in the Republican primary. That tells you something about the modern GOP. And what it tells you is that it isn’t all that modern. It is following in the boot steps of an older regime that reveled in brutality and oppression and also idolized a megalomaniac with bad hair and designs on world domination. That will be the legacy of Mein Trumpf.