On CNN this morning, Donald Trump took the next step on his path in pursuit of leading the nation into a new era of American Fascism. This election season has already seen his campaign devolve into a pit of violent skirmishes as his supporters assault peaceful protesters with the explicit encouragement of Trump himself. But his remarks today go even further down a very dark and dangerous road. 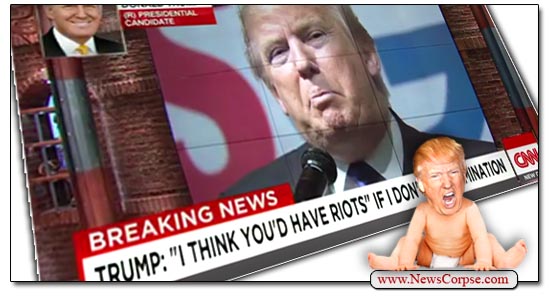 Donald Trump regards himself as the anointed King of America whose coronation cannot be opposed. He pontificates ceaselessly about his unparalleled magnificence on any undertaking from wall building to military missions, to healthcare to economics to race relations to religion. In his mind he is beloved by all and favored as the ultimate benevolent dictator that America has longed for. And as such, he cannot be denied his rightful place in the Palace on Pennsylvania Avenue. That’s why he said this to CNN’s Chris Cuomo (video below):

“I think we’ll win before getting to the convention, but I can tell you, if we didn’t, and if we’re 20 votes short or if we’re 100 short, and we’re at 1100 and somebody else is at 500 or 400 — because we’re way ahead of everybody — I don’t think you can say that we don’t get it automatically. I think you’d have riots. I think you’d have riots. I’m representing a tremendous — many, many millions of people. […] I think bad things would happen. I really do, I believe that. I wouldn’t lead it, but I think bad things would happen.”

So after declaring that he should receive an “automatic” ascension to the Republican Party’s nomination, even if he does not satisfy the rules that govern the nominating process, Trump inhales deeply to puff up his chest and let loose one of the most piercing dog whistles of the campaign yet.

By offering his opinion that “you’d have riots” if his tyrannical orders are not obeyed, he is giving his followers permission to fulfill his prophecy. He knows exactly what his storm-Trumpers are capable of, and the mere suggestion of violent opposition to another candidate is sufficient to send them into a frenzy of his own design. This is the same man who told his glassy-eyed disciples that he would pay their legal fees if they “knocked the crap out of” his protesters. How is that any different than offering a bounty to commit a criminal assault?

Make no mistake, this was a threat intended by Trump to convey that he is determined to be the GOP nominee, or else. Passing him over will be done at great risk. He wants riots to ensue should the party shun him. That’s why his threat consists only of the damage that would be done if he doesn’t get his way. He says that he “wouldn’t lead it,” but never says that it shouldn’t happen. If he were opposed to such riots, all he would have to do is add one line to his tirade telling his followers that under no circumstances should they engage in violence if the nomination goes to someone else. He conspicuously neglected to say that. That wasn’t an accident. It was a message. And it is just short of terrorism.

Donald Trump does not have a majority of delegates now, and may not have them when the convention commences. He has never had majority support from Republican voters. In fact, he has the highest percentage of Republicans who say that they would never voter for him if were the nominee. So the non-Trump Republicans had better be prepared for the calamity that Trump is plotting to unleash at the convention. They had better be prepared to respond to the storm-Trumpers and to keep the peace.

Consider this bizarre irony: If a majority of delegates do not vote for Trump, his faithful may seek to disrupt the convention with protests. And if the majority then decided to behave the way Trump supporters treat protesters at his rallies, Trump’s convention thugs could be met with the same sort of violent assaults. After all, Trump has maligned the very act of protesting, complaining that “there are no consequences anymore,” and lamenting that in the old days they would be “carried out on stretchers.” Now his words could come back to haunt him as the jackboot is on the other foot.

.@realDonaldTrump tells @ChrisCuomo, "I think we'll win before getting to the convention." https://t.co/bD1KmvD0wu

Addendum: As evidence that right-wingers have an affinity for violent conventions, recall the time that Rush Limbaugh called for riots at a Democratic convention in a rant he titled “Screw the World! Riot in Denver!“

4 thoughts on “White Riot: Donald Trump Threatens Riots If He Doesn’t Get The GOP Nomination”