In the past couple of weeks we’ve seen Republicans go nuts because President Obama didn’t wear a tie at a press avail. Then, at the next event, where he wore a tie, he caused another uproar because he also wore a tan suit (which all presidents have done for at least the last fifty years). And now we have a new controversy involving Obama’s alleged aversion to the Oval Office. 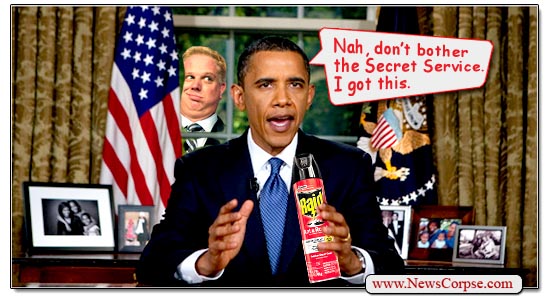 Schlock-jock Glenn Beck dug this one up for a segment on his video Internet blog (video below). It reeks of the time-tested, delusional, wingnut tripe that made Beck what he is today. Beck ranted that…

Indeed. Something is NOT right. Beck is not right. Obama has used the Oval Office for televised public addresses on at least two occasions. And on the other occasions where he spoke from the East Room or the Rose Garden, he was not changing anything about the presidency, since other presidents have done the same thing without it ever being portrayed as a problem.

The shallowness of attacks such as this reflect more on the attacker than the target. Especially since Beck would be the first person to condemn the President for exploiting optics if he did use the Oval Office more frequently.

And Beck isn’t the only one to sink to these levels of inanity. In fact, the last time Obama used the Oval Office, Jennifer Rubin of the Washington Post took a different angle by complaining that Obama “looked scrawny and ill-at-ease at the large, empty desk.” It’s just more proof that Obama can’t win with these freaks no matter what he does.

And speaking of Rubin, her current column for the Post sought to school her Tea Party comrades on the subject of “How should Republicans respond to Obama’s speech on the Islamic State?” Clearly they need some guidance after last night’s embarrassing display. But Rubin’s lesson isn’t much better. She opens with this note of confusion:

“The president says the Islamic State is not Islamic nor a state. Huh? Members of the group sure consider themselves Muslim, so who is the president to pass doctrinal judgment?””

Absolutely. And Charles Manson insisted that he was God, so we mustn’t argue with that either. To support her assertion she turns to uber-hawk/fruitcake Cliff May of the Foundation for Defense of Democracies who contends that ISIL is a state because “It has a flag.” Well, so does The Kiss Army. Rubin also relies on May’s assurance that ISIL’s leader, Abu Bakr Al-Baghdadi, “is a fundamentalist — not a heretic,” and therefore a Muslim. However, Rubin later qoutes Fred Kagen of the ultra-rightist Weekly Standard saying that ISIL is governed by “its hateful version of an old Islamic heresy.” So he is a heretic after all? It only took until the very next paragraph for this contradiction to appear.

And, finally, Rubin closes with an unflattering comparison of Obama to his predecessor, saying that “Obama is no George Bush.” Thank God for that. I’m not sure America could endure another incompetent like Bush, who was responsible for the conditions that led to ISIL, as well as leading us into a quagmire in Iraq, fouling our environment, and bankrupting our economy.

Have you read the acclaimed ebook from News Corpse?
Get Fox Nation vs. Reality. Available now at Amazon.

The Broadcasting Board of Governors (BBG) is the federal agency responsible for all U.S. government and government sponsored, non-military, international broadcasting. Its affiliates include the Voice of America, Alhurra, Radio Free Europe, and Radio and TV MartÃ­. If its mission was not originally intended to be a purveyor of propaganda, the Bush administration has seen to it that that is what it has become.

Now President Bush has made his latest attempt to further mire the agency in disgrace by nominating Clifford May to the Board. May is a former Republican National Committee communications director and the President of the Foundation for the Defense of Democracies, whose list of directors and advisors reads like a who’s who of neocon warmongers. He is an advocate of torture abroad, the suspension of civil liberties at home, and always the supremacy of America by virtue of its military might. As a writer for the National Review and a frequent guest on television news programs, he has a record of deliberately inflammatory and partisan rhetoric. Here are a few examples:

On coddling terrorists: “[Democrats] demand that foreign terrorists abroad be given the same privacy protections enjoyed by American citizens here at home.”

Actually, Democrats were demanding that Americans be given the privacy protections they are promised by the Constitution.

On the success of the surge: “…the threat of an Iraqi civil war has diminished and there is no ‘resistance’ movement to speak of.”

Since May made this claim, 236 more American troops died in Iraq, along with 4,591 Iraqis.

On the Left as traitors: “…some of those on the left who would like to see America defeated in Iraq as a demonstration exercise that U.S. power never, never can be used for good.”

Setting aside the repulsive assertion that the Left is rooting for defeat, May erroneously implies that there is some good in BushCo’s occupation of Iraq.

This isn’t the first time Bush has used the BBG for blatantly political purposes. He had previously installed the utterly corrupt Kenneth Tomlinson as chairman. Tomlinson, thankfully, didn’t last long.

The circumstances proximate to May’s nomination further illustrate Bush’s purposeful mission to staff the BBG with faithful cronies. To make way for May, Bush had to withdraw his previous nominee, Mark McKinnon. McKinnon himself is a loyal Republican who worked on both Bush presidential campaigns. He was also a sitting member of the Board, having received a recess appointment from Bush in December of 2006. McKinnon’s fate was sealed, however, when earlier this year he resigned his post as the lead media consultant for John McCain saying…

“I just don’t want to work against an Obama candidacy. [Electing Obama] would send a great message to the country and the world.”

Despite insisting that he remains a “friend and fan” of the McCain campaign, whatever loyalty and qualifications he had that justified his prior service and nomination were null and void as he no longer displayed sufficient unquestioning partisanship. The Bushies require greater obsequiousness than that.

May still needs to be confirmed by the Senate to take a seat on the Board. With less than six months remaining in Bush’s term it would be idiocy for the Senate to do so. That obviously doesn’t rule out the possibility that they will. The FISA bill that the Senate passed last week was fully in line with May’s position on the issue. And it passed with Barack Obama’s vote. That should be an indication of how much we can rely on the Senate to do the right thing.