President Obama gave a statement (video below) this afternoon on the barbaric murder of journalist Jim Foley who had been held in captivity by ISIS for two years. The statement was powerful and resolute, condemning ISIS as terrorists who brutalize Muslims, Christians, and other innocents in pursuit of an extremist agenda. Obama said in part…

“Today, the entire world is appalled by the brutal murder of Jim Foley by the terrorist group, ISIL. […]

“Let’s be clear about ISIL. They have rampaged across cities and villages, killing innocent, unarmed civilians in cowardly acts of violence. They abduct women and children and subject them to torture and rape and slavery. They have murdered Muslims, both Sunni and Shia, by the thousands. They target Christians and religious minorities, driving them from their homes, murdering them when they can, for no other reason than they practice a different religion. […]

“We will be vigilant and we will be relentless. When people harm Americans, anywhere, we do what’s necessary to see that justice is done.”

Within seconds of the completion of the statement, Fox News broadcast responses from a couple of their regular contributors, Andrea Tantaros and Pete Hegseth. Their remarks were utterly repulsive, dismissive, and disrespectful to the President, the memory of Mr. Foley, his family, and the nation. 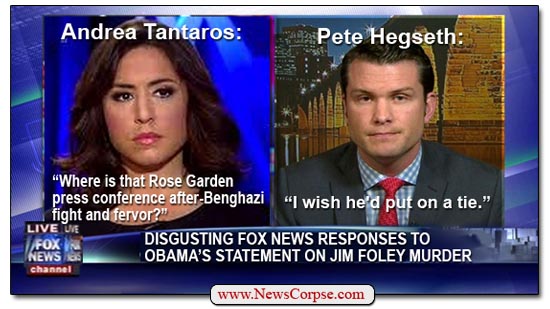 Tantaros, reaching back to a favorite of Fox’s well worn anti-Obama themes, said “Where is that Rose Garden press conference for Benghazi?” (See update below) This remark is an affront to Foley whose sad fate had nothing to do with Benghazi. It was just an attempt by Tantaros to brazenly exploit Foley’s tragedy in pursuit of her own noxious political goals. But it was also something that Fox News does routinely. They have tied everything from ObamaCare to missing Malaysian planes to Benghazi. They will bring up Benghazi in any circumstance no matter how absurdly unrelated. And in this case they overstepped the bounds of decency by taking advantage of a gruesome murder before even one day had passed. On top that, Tantaros was wrong on the substance of her vile remark because Obama actually did give a statement about Benghazi in the Rose Garden the day following the attack.

Hegseth is supposedly a veteran’s advocate who appears on Fox News to bash the Commander-in-Chief. He is the head of Concerned Veterans for America, a phony front group that is almost entirely bankrolled by the Koch brothers. His remark following Obama’s statement was “I wish he’d put on a tie.” Really? That was what he came away with after the President denounced a horrific act of terrorism against an American citizen? Hegseth is apparently more concerned about the President’s attire than the fate of American victims or the state of our nation’s campaign against terrorism. He is so obsessed with finding fault with Obama that he ignored the tribute to Foley and the passionate promise to exact justice, in favor of acting as the spokesman for the Fox News Fashion Police.

As noted above, these were not opinions developed after thoughtful consideration. They came in mere seconds after Obama stepped away from the podium. That is how close to the top of their minds these sort of depraved ideas linger. These are the kind of commentaries that you can expect from a network whose mission to disparage the President, Democrats, and liberals, takes precedence over honest reporting or even common decency.

For more examples of Fox News’ commitment to indecency…
Get Fox Nation vs. Reality. Available now at Amazon.

[Update:] Another listening to Tantaros’ remark shows that she said “Where is that Rose Garden press conference after–Benghazi fight and fervor?” She said “after,” not “for.” So apparently she was aware of Obama’s post-Benghazi Rose Garden speech. However, everything noted above still stands with regard to her exploiting the Foley tragedy with an interjection of Benghazi, which had no bearing on it. In fact, this makes it even worse because she is now saying that she wishes that Obama’s response to Foley was more forceful, like after Benghazi. Huh? After Benghazi she, every other GOP/conservative, was adamant that Obama’s response was inadequate. Now, all of sudden, she’s praising Obama’s Benghazi response? There is more than a touch if schizophrenia in this.

9 thoughts on “DISGUSTING: The Fox News Response To Obama’s Statement On Foley Murder By ISIS”