Poor Donald Trump. He continues to be a victim of of his own ignorance and acutely deficient comprehension skills. As a result he misunderstands even the simplest subjects and then lashes out in mindless tantrums that only make him look even more foolish. It’s a downward spiral of psychotic collapse that repeats itself on a nearly daily basis. And despite all the evidence to the contrary, Trump still thinks he’s a “stable genius.”

On Wednesday Trump was typically miffed at the “fake” news he perceived being published by the “failing” New York Times. Michael Schmidt and Maggie Haberman of the Times posted a well researched article about Trump receiving $150,000 from a Ukrainian oligarch as payment for a twenty minute video address in September of 2015. The money was “donated” to Trump’s foundation which has a notably poor record of doing any charitable work. In fact, it has been found to have unlawfully funneled money to Trump via phony transactions. In one case the foundation bought a portrait of Trump that it hung at his golf resort. On another occasion foundation funds were used to pay a legal settlement that was owed by Trump personally.

Per usual, Trump expressed his outrage at the Times via Twitter:

The Failing New York Times wrote another phony story. It was political pundit Doug Schoen, not a Ukrainian businessman, who asked me to do a short speech by phone (Skype), hosted by Doug, in Ukraine. I was very positive about Ukraine-another negative to the Fake Russia C story!

Trump’s tweet doesn’t in any way refute the reporting by the Times. In fact, he validates it. And Trump’s failure to grasp what’s obvious was noted by the article’s authors on Twitter here and here. In the article the authors explicitly note that:

“The special counsel is investigating a payment made to President Trump’s foundation by a Ukrainian steel magnate for a talk during the campaign, according to three people briefed on the matter, as part of a broader examination of streams of foreign money to Mr. Trump and his associates in the years leading up to the election.”

“The event, his first foray into global politics during the campaign, was set up by Doug Schoen, a veteran political consultant and pollster who works with Mr. Pinchuk, according to a person familiar with how the speech was arranged. Mr. Schoen, a frequent Fox News guest, has known Mr. Trump for years and contacted him personally to set it up at the end of August 2015, according to the person.”

So Trump is correct. It was Schoen who set up the speech. But the speech wasn’t for Schoen, nor did Schoen pay for it. How could he? He’s just a Fox News shill who pretends he’s a Democrat so he can get booked on Fox and bash Democrats. It was the Ukrainian billionaire Victor Pinchuk who was Trump’s benefactor. Schoen was a go-between. Pinchuk is a steel magnate who has been accused of dumping Ukrainian steel into U.S. markets. He engaged Schoen, who knew Trump, to facilitate the appearance.

Even more suspicious is the fact that it was Trump’s lawyer, Michael Cohen, who solicited the donation. That’s the same Michael Cohen whose home and offices were just raided by the FBI. According to the Times, Schoen “had gotten to know Mr. Cohen by running into him in the green room at Fox News.” Well, as the Church Lady would say, “isn’t that convenient?”

Once again, Trump’s wild-eyed indignation has no basis in reality. He’s simply disgorging illogical outbursts that fail to advance any coherent objective, other than whining about the media. And in this case of Trump’s unhinging, as in most all of the others, the media was just doing its job responsibly, accurately, and honestly. Trump thinks that if he hollers and stamps his feet enough, everyone will agree with him. But he’s only pointing out how pathetic he is at comprehending a simple news story. SAD!

President Obama’s State of the Union address was generally well received by a majority of Americans with polling showing high approval for the speech (CNN, PPP). But oddly enough, Fox News managed to put a negative spin on the public reaction.

What makes this particularly odd is that the article that Fox posted on their web site had mostly positive things to say about the speech. However, the headline could not have been more downcast: “Obama’s State of the Union speech a well-crafted, hollow recitation of nothing more than words.” 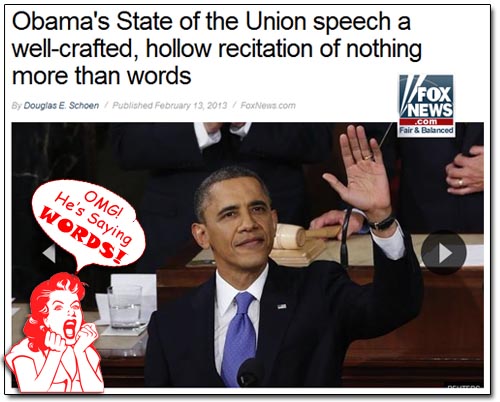 A hollow recitation of words? As opposed to a recitation of shoes, or bees? How about a recitation of pie? It is pretty much a given that, by definition, all recitations are of words. This may be a detail that escapes the linguistic geniuses at Fox who can’t seem to even get through the second paragraph of the article with making numerous grammatical errors.

More to the point, the headline Fox composed was utterly detached from the content of the article. At no point did the author, fake Democrat Doug Schoen, write that the speech was “a hollow recitation of nothing more than words.” That was an invention of the headline writer. Schoen did, however, write that the speech was “well-written, well-crafted” and “hit all the right notes.” He also said that it “was a great speech.” None of that made it into the headline.

Had Fox wanted to disparage Obama without resorting to fiction, there was plenty in Schoen’s screed from which to choose. Schoen used much of his space to blame Obama for the obstructionism on the part of congressional Republicans. But the headline writer must have thought that angle would be too steep for the Fox audience. All things considered, that was probably the right call.

Watching Fox News, you sometimes have to wonder where they get the idea that they can call their guests “Democrats.” It appears that they go to great lengths to find the most objectionable opponents of the Democratic Party and slap them in front of a camera with “D” next to their name. For instance:

Boy, with friends like that, who needs enemas? This list just scratches the surface. The Fox Democratic lineup has also featured such Democrat bashers as Lanny Davis, Susan Estrich, Harold Ford, Jr., and even Dick Morris. And that’s just their regulars. Fox scours the news wires to find any incident wherein a Democrat is critical of other Democrats. In fact, that’s the fastest way for a Democrat to get invited to appear on Fox.

If Fox News gets to chose who they think represent Democrats, I think I should be able to decide who is a Republican. So I’ve assemble a short list of folks whom I believe best represent the state of the GOP:

That should level the playing field. 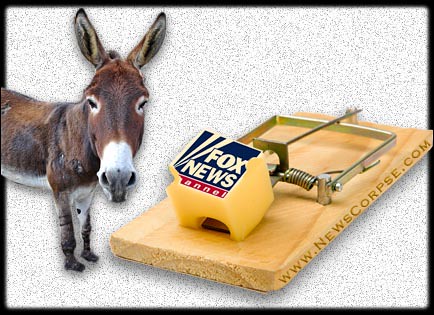 I have long advocated that Democrats and progressives refrain from appearing on Fox News (see Starve the Beast). To some extent that advice has been heeded and many prominent Democrats are staying away or curtailing their visits.

Consequently, Fox has had to fabricate their own version of Democrats and they have created them in their own image. They start by wrangling has-beens who are probably desperate for attention and then promise them airtime and the respect of Fox viewers who love to hear bad things about Democrats, especially from reputed Democrats.

Tonight’s analysis of the primary in Pennsylvania provides a good example of this. On Greta Van Susteren’s show, “Democratic” pollster Doug Schoen appeared to offer this cretinous take on Joe Sestak’s victory over Arlen Specter:

Van Susteren: This Specter loss is a huge shift, is it not?
Schoen: Absolutely Greta. This is an anti-Washington, probably anti-Obama vote that makes clear that incumbency and being a Washington insider or a political insider is just not good.
Van Susteren: So what does it mean? I mean you have Sen.Bennett losing a few weeks ago. So is it anti-Washington or anti-Democrat?
Schoen: It’s both. I mean there’s clearly anti-Washington sentiment. On the Republican side it’s the Tea Party movement. On the Democratic side it’s more liberal anti-systemic sentiment. In November I think what we’re going to see is anti-Democratic sentiment because the Democrats control the executive branch and congress but there’s a lot of anger on both sides of the aisle, that’s for sure.

Where does Schoen get the idea that Sestak’s win is anti-Obama? The President and the Democratic establishment in Pennsylvania only backed Specter out of loyalty for his having switched parties. But Sestak ran as an Obama Democrat pledging to support health care, financial regulation, job creation, energy reform, and other White House initiatives. He was not against the President by any stretch of the imagination, and the White House will surely support him in the general election in November.

The vote for Sestak was an affirmation of Democratic principles, not a repudiation. Pennsylvanians were not interested in giving Specter, a Republican senator for over thirty years, another term based on his decades of support for the GOP. They had a real Democrat to vote for in Sestak, so they did. But somehow Schoen took that to be an anti-Obama, anti-Democrat position. And he added a warning that Democrats had better “move to the center” or they will “pay a huge, huge, price in the midterm election.” That advice is as bad as his election analysis.

Another Fox News Dem, Pat Caddell, delivered an opinion that was so harebrained that Rush Limbaugh quoted it:

“The Democratic Party is purging the Democrats. A lot of it is just anger, and this is anti-establishment. […] We have never had, in my experience of studying alienation – I started when I was 20 years old in polling, 19 in doing national politics, and I want to tell you: Never have I seen anger as great as it is.”

Wrong again. As I noted above, Spector’s loss was the purging of a Republican who had flipped to the Dems in a cynical attempt to retain his seat. And how can Caddell, who is 60 years old, say that he has never seen anger like this? If he was 20 when he started out, then he went through the Vietnam years and Watergate, as well as the Clinton impeachment. Does he really think that Tea Baggers are more angry than anti-war protesters or civil rights marchers were?

The truth is that Schoen and Caddell have been wrong for a long time. They co-authored an op-ed for the Washington Post in February that concluded with an ominous warning for Democrats:

“Unless the Democrats fundamentally change their approach, they will produce not just a march of folly but also run the risk of unmitigated disaster in November. “

Well, to the extent that the primaries held today represent a preview of November, Schoen and Caddell have completely missed the boat. Sestak’s win is a win for Democratic principles and gives Pennsylvania Dems a better chance at winning in November. And Jack Conway’s victory in Kentucky, and Bill Halter forcing Blanche Lincoln into a runoff in Arkansas, are further repudiations of the Schoen-Caddell cabal.

Schoen’s and Caddell’s careers consist almost entirely of repeated appearances on Fox. They frequently show up on Cavuto and Beck, and recently appeared together on Hannity’s show. They seem to have discovered that they can make a couple of bucks by pretending to be Democrats and advising the party to be more like Republicans. Their advice, however, has proven to be wrong time and time again. So the only thing stupider than the advice these phonies peddle would be for any Democrat to take it.