Obviously Rush Limbaugh’s infantile tantrum regarding his hope that President Obama fails has not gone over well with most Americans. But it has warmed the hearts of dittoheads, Republicans, and Fox News personnel. At the top of that list would be the Fox News Washington managing editor, Bill Sammon.

In his zeal to to defend Limbaugh, the leader of the Republican Party, Sammon dug up a comment by James Carville in 2001. Referring to President Bush, Carville was quoted as saying, “I certainly hope he doesn’t succeed.”

That mere sentence fragment is the whole of Sammon’s reporting on Carville’s comments. Carville said a great deal more which was reported elsewhere, but Sammon chose not to include any of it because it didn’t support the impression that Sammon wanted to create – which was to associate Carville’s statement with Limbaugh’s. Well, here is the rest of Carville’s comments:

“People basically like this president as a person and they want him to succeed, but they have some pretty serious doubts that have not crept in but are sort of there. You have almost half the country saying he is in over his head. Over half the country saying he is for the powerful. And as much as I would like for it or wish for it, they are not going to pull away completely from him months into his administration.

“I don’t care if people like him or not, just so they don’t vote for him and his party. That is all I care about. I hope he doesn’t succeed, but I am a partisan democrat. But the average person wants him to succeed. It is his country, his life or their lives. So he has that going for him. There is a lot that is going to happen between now and next November. It is not that people don’t like him. It is not that people don’t want him to succeed but it is also not that he doesn’t have some serious underlying problems.”

It seems abundantly clear that the only thing Carville is talking about was succeeding electorally. He was not saying that he hoped Bush’s policies fail, he just wanted Bush and other Republicans to lose elections. Contrast that with Limbaugh’s repeated assertions that it is President Obama’s agenda that he hopes will fail. What’s more, Limbaugh encourages others to adopt the same hope for failure, and disagreeing with Limbaugh is tantamount to treason. Carville is directing his comments to results from polling that express public opinion. He is not attempting to persuade anyone to adopt his opinion. And if he were, there would be no repercussions for those who disagreed.

It is also abundantly clear that Sammon deliberately truncated Carville’s statement to slant the story against Carville. Furthermore, Sammon included responses from Limbaugh regarding this story, but didn’t give Carville the same opportunity to respond.

Fair and balanced? Uh huh. And remember, Sammon is a news executive at Fox, not a commentator. But even he must bow down to kiss Limbaugh’s ring.

Prediction: I want to go on record as the first to predict that Fox will launch a new TV program starring the leader of the Republican Party. Fox News CEO, Roger Ailes previously produced a syndicated show for Rush Limbaugh that failed miserably – perhaps because TV required that viewers actually look at him. But Glenn Beck has proven that Fox viewers are less discriminating than the broader syndication audience. Ailes and Limbaugh will try again, this time on a more friendly platform.

In the fog of hard-fought political wars, the foot soldiers are exposed to stimulating sensations as the campaigns heat up and swirl with emotion. The ups and downs pound furiously as sweaty staffers strain to satisfy insatiable supporters and reporters. 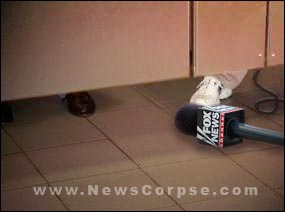 One such reporter appears to have succumbed to the siren call of amour on the campaign trail. Sources have revealed that the fittingly macho-named Major Garrett is tied romantically with the disgraced “non-gay” senator from Idaho, Larry Craig. While there has been no confirmation at this time, the sourcing is “strong, very strong.” Garrett is the reporter who covered the Craig affair for Fox News. And while the photo at the left may not be considered conclusive evidence, it raises the temperature of the scandal significantly.

This revelation comes on the heels of the New Hampshire primary where Garrett reported with titillating excitement that Hillary Clinton’s campaign was floundering and that a staff shake-up was imminent.

“…some of the top advisers to former President Clinton are set to join to Hillary’s faltering campaign as early as tomorrow…Carville and Begala’s strategic advise will now carry greater weight than that of the original team that devised a strategy that has led to a defeat in the Iowa caucuses and a likely defeat in tonight’s New Hampshire primary.”

Garret was only one of many whose prescient observations presumed the fall of the house of Clinton. But he alone swept away the veil that barely hid the forms of Carville, Begala and their naked ambitions.

As it turns out, Carville vehemently denied that he was becoming entwined with the Clinton campaign:

“Fox was, is and will continue to be an asinine and ignorant network. I have not spoken to anyone in the Clinton campaign about this.”

“…whoever told you I am joining Hillary’s campaign fed you some bum info. It’s just not true […] I’m not coming in as a volunteer, or as an adviser, or as a strategist or anything else.”

“I am not trying to screw you […] I’m careful and don’t have a reputation for pulling stories out of my ass. I’m not now. The sourcing is strong, very strong, or I wouldn’t go with it.”

You can almost hear the strength oozing from Garrett’s baneful wale. Perhaps he is lamenting having promised not to screw Begala. But it is notable that he made no such promise to Sen. Craig.

In the end, it is not possible to provide skin-tight confirmation of Garrett’s dalliance with Craig. Though the evidence at this time is somewhat less than circumstantial, I have confidence in the faithfulness of my sources. But should this flare into a climax of reportorial passion, I vow to treat Garrett with uninhibited fairness. When I receive his call denying that there is any truth to the scandalous allegations herein, I will gladly take it under advisement.