Who knew that Disney was so far ahead of their time. This cartoon captures perfectly the manner in which Glenn Beck and his ilk employ lies and fear to indoctrinate their congregation of the feeble-minded. Plus, it is F@%KING HILARIOUS. Enjoy it before the Copyright Cops take it down.

And a shout out to its creator, Jonathan McIntosh at Rebellious Pixels. 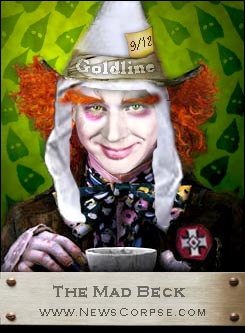 Update: This video is getting a lot of attention, as it deserves. There were about 6,000 views when I posted it, and now it is over 200,000 (I’m sure I’m responsible for most of that). People clearly enjoy satirizing Beck. There is plenty of material there to work with. I have been down that road myself (see Malice in Wonderland)

I think it’s interesting that it has been featured at both the Huffington Post and Fox Nation.

The Fox Nationalists are aghast that Beck is being parodied. Some are vowing to boycott Disney. Seriously, they think that Disney produced this. That’s the level of their intelligence. Others think the ending is an incitement to violence, particularly an incitement to harm Beck. Someone needs to tell them that radios are inanimate objects. And, oh yes, that cartoons are not the same as real life.

At HuffPo there is a more generally sane reaction. They have an appreciation for the quality of the work and, of course, the good humor. I’m just glad to see this getting some exposure.

Plus…..Beck responds. On his radio show Beck made a point of weaving his conspiratorial delusions around this video and its creator. He spun a tale that entwined the federal government, the National Endowment for the Arts, and even the White House. Of course, without a hint of evidence. His paranoia knows no bounds.

“It is some of the best, well made propaganda I have ever seen.” […]

“If I’m not mistaken, some of these remix videos – it’s very interesting – I believe get federal funding. I believe it was…one these things that he’s involved in was one of the first to receive federal funding. We’re looking into the funding of this gentleman and the incredible propaganda against me, like you’ve never seen. using Disney and Disney cartoons.”

Listen to the whole thing yourself. His tone of voice is ripe with disgust, and his inflection on words like “social justice” and “Chicago” fill them with foreboding. And now Mickey Mouse joins in the fray:

The “incredible propaganda” against Beck is a wonder to behold. But no more wondrous than the propaganda he spews everyday on his own. Watch your back, Jonathan. Beck is “looking into” you.