Okay, okay. Everybody already knows that Fox News is a fake network that was created only to promote conservative politicians and policies. And more recently it has become the wholly owned subsidiary of Donald Trump’s White House. There is a revolving door between the network and the presidency, with personnel being shared by both and with a common purpose to advance the interests and propaganda of Trump. We know.

Nevertheless, new revelations that shock and disgust continue to come forward. The latest is a scoop by the Daily Beast who acquired some damning emails between Trump’s disgraced former Director of the Environmental Protection Agency (EPA), Scott Pruitt, and producers for Trump’s favorite Fox News program, Fox and Friends. The Daily Beast reveals that:

“In past interviews with President Trump’s favorite cable-news show, the then-EPA chief’s team chose the topics for interviews, and knew the questions in advance.

“In one instance, according to emails revealed in a Freedom of Information Act request submitted by the Sierra Club and reviewed by The Daily Beast, Pruitt’s team even approved part of the show’s script. […]

“In multiple interviews on Fox & Friends, Pruitt was essentially allowed to dictate the terms for the interview and avoid any difficult questions.”

The Daily Beast posts copies of the emails that explicitly reveal how Fox News bent over backwards for Trump’s surrogates. Even to the point of asking them to approve the setups used to introduce them. This, of course, is in addition to the regular Trump-fluffing that occurs on Fox News throughout the day. The network is, after all, tightly integrated with Trump’s White House. Trump’s former Director of Communications, Hope Hicks, is the current Fox News executive vice-president and chief communications officer. And Trump’s current Deputy Chief of Staff is the former president of Fox News and Hannity producer, Bill Shine, who was fired for covering up sexual misconduct by Roger Ailes and Bill O’Reilly. And it was recently discovered that Shine is still on the Fox payroll, so he’s being paid by both the White House (i.e. taxpayers) and Fox News simultaneously.

The Daily Beast contacted Fox about the Pruitt matter and they issued a vague statement saying that “This is not standard practice whatsoever and the matter is being addressed internally with those involved.” So you can rest assured that the proper disciplinary measures will be taken. After all, when Sean Hannity and other Fox News personalities were caught campaigning for Trump and other Republicans, they were slapped on the wrist and told to stop. And then Hannity and Jeanine Pirro showed up at a recent Trump cult rally anyway. This is business as usual for Fox News and it isn’t going to change.

There are innumerable ways in which Donald Trump has damaged the United States during the last fifteen tumultuous months. Even setting aside his unsavory connections to Russia and his role in helping them subvert our democracy, Trump’s negative impact is historically catastrophic. It’s ironic that he repeatedly brags that he has done more in his first year than any other president. Because he’s right, although not in the way his narcissistic dementia leads him to believe.

Trump has brazenly ignored long-standing principles for financial conflicts of interest. He has terminated regulations that protect citizens from environmental harm, consumer abuse, healthcare, and workplace safety. He has promoted discrimination against vulnerable communities encompassing race, gender, sexual orientation, and religion. He has recklessly dangled the prospect of war with nuclear powers like Iran and North Korea. He has violated laws associated with ethical governing and has been frequently repudiated by the federal courts. And he has generally lowered the standards for civil discourse with his infantile name-calling, insulting, bullying, slandering, and outright lying.

But nowhere in this morass of corruption and immorality has Trump been more destructive than with his hostility to the free press and the First Amendment. He has made attacking the media a core component of his march to authoritarian rule. His cries of “fake news” whenever any journalist dares to report facts that he doesn’t like ring out across the landscape of the deplorable disciples that he cultivates. And it’s having an overtly dangerous effect on the national political environment.

A new poll by Quinnipiac asked voters this question: “Which comes closer to your point of view: the news media is the enemy of the people, or the news media is an important part of democracy?” The response by all respondents shows that a majority consider the media to be “an important part of democracy” (66 -22 percent). And while that 44 point difference is significant, it’s still frighteningly low. But it was brought down by one particular group of respondents. A majority of Republicans (51%) said that the media is “the enemy of the people.” No other demographic sector came anywhere close to that.

The phrasing of the question was clearly designed to elicit support or opposition to Trump’s infamous disparagement of the press. He has frequently called the media “the enemy of the people” in his rallies and public statements. It’s a concept he borrowed from dictators like Joseph Stalin. But the fact that it has caught on with so many Republican voters is more than a little disturbing. It indicates that Trump is successfully infecting a segment of the population with an ideology that is flagrantly anti-American. And worse – it’s pro-totalitarian dictatorship.

Fortunately, other results from the survey are more comforting:

Still, that doesn’t absolve the Republican Party from embracing a despicable philosophy that denigrates the press and disrespects the Constitution. If they have problems with the media they should seek to reform and/or improve it, while still cherishing its ideals. Their position that it’s an opponent of democracy casts it as something that needs to be defeated and done away with. And that makes them the real foes of democracy.

Every now and then somebody on Fox News strays from the herd and does or says something critical of Donald Trump. It’s a rare event that is mostly confined to outliers like Shepard Smith or a courageous guest. In most cases it is treated as the aberration that it is and quickly buried under the rush of Fox’s typical pro-Trump propaganda. 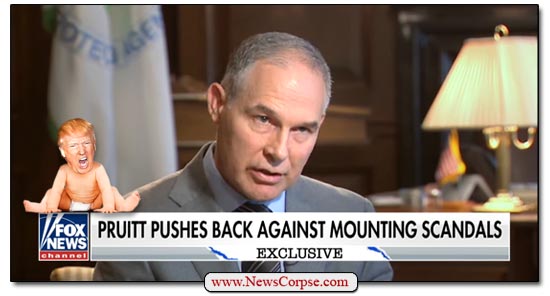 On Wednesday, however, the criticism came from an unlikely source. Ed Henry, the chief national correspondent for Fox News, interviewed the Environmental Protection Agency (EPA) administrator, Scott Pruitt (video below). In what Pruitt must have assumed would be a friendly media encounter, he was surprised by the aggressive tone of Henry’s inquiries. The questions addressed some of the most controversial scandals that have erupted during his tenure at the EPA.

Henry asked Pruitt why he went around Trump to give two top aides raises after the President refused the request. When Pruitt said that it was staffers who did that and that he didn’t know anything about it, Henry pushed back asking Pruitt to confirm that he didn’t know what was going on in the department he was supposedly running.

Henry also asked how renting a Washington, D.C. apartment at sweetheart rates from the wife of a lobbyist with business before the EPA was “draining the swamp.” Pruitt replied that there was nothing untoward about the arrangement. So Henry offered examples demonstrating that his $50.00 a night rental was way out of line with Washington rates for residences or hotels.

This appearance of actual journalism at Fox News is peculiar in general, but downright bizarre for Ed Henry.. He is one of the most squishy Trump-fluffers on Fox News. He is a frequent co-host of Trump’s favorite Fox show, Fox and Friends. There was a time in the past when Henry passed himself off as a straight-up reporter. But then he was suspended by Fox for having had an extramarital affair. When he returned to the air it was like he had been given a new mission to serve as a Trump sycophant. Perhaps it was the price of his reinstatement.

So why would Henry suddenly show some gumption and take on Trump’s EPA boss? The most plausible theory is that he was ordered to do so. And those orders could only have come from one place: Donald Trump. Fox wouldn’t independently direct Henry to go on the attack. They would have to have had instructions. And Trump has reasons to want Pruitt to look bad in public. With the scandals he has brought to the White House, including ludicrous spending for things like first-class air travel and a $40,000.00 secure phone booth in his office, Trump might be looking for excuses to fire him.

The signs are cropping up throughout the White House. When asked about Pruitt’s status Wednesday, press secretary Sarah Huckabee Sanders said it was “under review.” Deputy press secretary Hogan Gidley was similarly non-committal saying that he “can’t speak to the future of Scott Pruitt.” It sounds very much like Trump’s people are bailing on Pruitt. They would not do that without permission. Nor would Fox News. So it would be interesting to find out if there were any communications between Trump and his State-run TV network that directed Henry to filet Pruitt. He has been meeting with Fox Newsers much more in recent weeks, which suggests that their already close relationship is getting even closer.