True to form, Donald Trump took to Twitter after the Washington Post revealed his reckless disclosure of classified information to Russian officials. This occurred at a White House meeting with Russia’s foreign minister Sergei Lavrov and ambassador Sergey Kislyak. The fallout from the story has driven new demands for independent investigations of Trump’s unsavory connections to Russia. Trump’s tweets were typically self-serving and lacking relevant detail and substance: 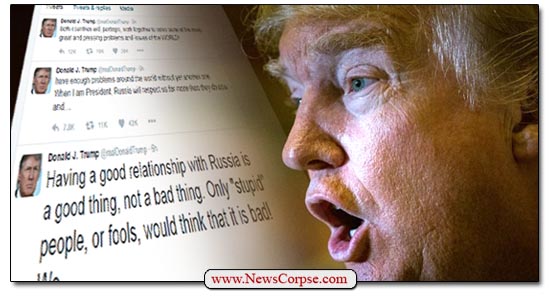 As President I wanted to share with Russia (at an openly scheduled W.H. meeting) which I have the absolute right to do, facts pertaining….

…to terrorism and airline flight safety. Humanitarian reasons, plus I want Russia to greatly step up their fight against ISIS & terrorism.

These tweets also contradicted previous responses from the White House dismissing WaPo’s story. First the administration claimed the story was false. Now Trump himself has abandoned that tack. He’s admitting that he divulged information, possibly classified, but that he’s allowed to do so. But even that is a transparent dodge. The problem here isn’t whether the President is acting legally with regard to classification status. It’s whether he’s acting prudently with regard to national security. Divulging information that could advantage hostile foreign nations (i.e. Russia), and alienate allies, could violate other laws.

Following the story’s publication, Fox News went into Emergency Trump Defense Mode. The memo must have gone out to demean the Post and the contents of its story. Because everyone on Fox had the same message. They disputed the Post’s reporting and absolved Trump of any wrongdoing. But the pinnacle of flagrant Trump fluffing occurred, as usual, on Fox and Friends.

The “Curvy Couch” potatoes ridiculed any notion that Trump had misspoken as mere hyperbole from the hysterically anti-Trump media. They began with a video from Tucker Carlson’s show wherein he complained that Trump’s critics “regard him as the single greatest threat to Western civilization since atomic weapons.” And then co-host Brian Kilmeade let this nonsense loose:

“The also thing to keep in mind too is, Donald Trump didn’t tweet out last night. I thought that shows an additional discipline. Let’s listen, let my guys handle it and Dina Powell handle it. They were there, they can walk it back.”

As we already know, Trump did tweet about this. And it was only about an hour after Kilmeade lavished praise on him for not doing so. If Kilmeade thought Trump’s Twitter silence was evidence of his discipline, what does he think now? Will he correct the record on Wednesday’s program? Will he concede that Trump is lacking discipline? Even Carlson said it was fair to consider Trump “undisciplined and impulsive” before returning to his robotic exaltation.

This is the problem that all Trump defenders have to face. Even after they come to his aid, he is likely to shift gears in a way that makes them look like fools. That’s always a risk of doing business with Trump. He is so erratic and focused solely on his own welfare that you stand to get run over by a fleet of buses. And if you pivot to avoid it, you’ll just get hit again when he shifts into reverse. So good luck, suckers.

Let’s face it, political surrogates are a weaselly species who make a career of justifying the unjustifiable. For that reason we have to have some sympathy for Donald Trump’s surrogates. They have the dirtiest job in politics, and one that exceeds the bounds of any that came before it. Chief among those poor souls is Kellyanne Conway. 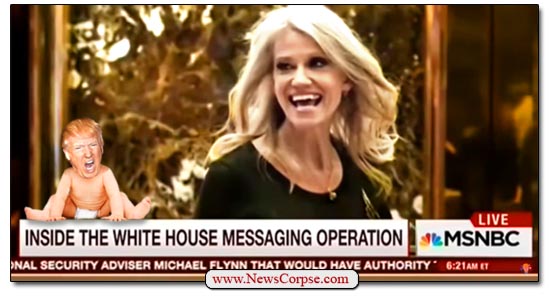 Conway served as Trump’s campaign manager last year and is currently Counselor to the President. She has had to dive feet first into the mud on more occasions than can be counted. Consequently, she often emerged with absurdities like “alternative facts,” including the fictional Bowling Green Massacre. She was in a constant struggle to cover for Trump’s lies with lies of her own. It’s notable that she wasn’t always so supportive.

Nevertheless, she continues to get booked on cable news shows that apparently aren’t interested in honest discourse. However, there was an exception on Monday when the hosts of Morning Joe decided to reveal some some of the backstage banter that frequently is more illuminating than what gets broadcast. In a conversation about the truthiness of the Trump White House, Mika Brzezinski related an exchange she had with Conway:

“This is a woman, by the way, who came on our show during the campaign and would shill for Trump in extensive fashion. And then she would get off the air. The camera would be turned off. The microphone would be taken off and she would say, ‘Blech, I need to take a shower,’ because she disliked her candidate so much.”

The only thing surprising about Conway’s candid comments is that she she said them aloud. But she was saying what most of us were already thinking. Trying to defend a president who lies incessantly, insults his critics with vulgarities, and generally displays a level of intelligence that ranks lower than a banana slug, is going to leave a decent person somewhat nauseous. So in that context there might actually be some hope for Conway.

Brzezinski’s co-host (and fiance), Joe Scarborough added that Conway had implied that her job as a Trump apologist was merely a “summer job” which she would soon be over with. That appears not to be the case since she signed on full time with the administration. Therefore, we can expect to continue seeing her cleaning up after her floundering boss for the indeterminate future. Hopefully she has a sufficient supply of anti-bacterial soap to wash away the muck and grime.