Donald Trump returned from his Embarrass America First Tour to find that the scandals he hoped to escape were all waiting for him. He still has a special prosecutor investigating his links to Russia. His son-in-law, Jared Kushner, is embroiled in an espionage controversy. His immigration ban on Muslims was struck down by another federal court. And his legislative agenda is non-existent. 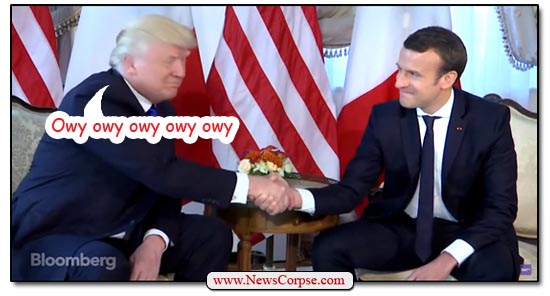 The week Trump spent abroad was filled with blunders and a novice’s inability to grasp international affairs. For instance, our apprentice president didn’t know that Israel was in the Middle East. He failed to uphold a decades long commitment to the defense of our NATO allies. And then there was his awkward photo-op with the Pope that looked like something from the new Twin Peaks.

Despite his own hollow bragging that the trip produced significant rewards for the economy and jobs, there was no real evidence of any tangible benefit. Politifact rated Trump’s boasting as “False,” describing it as “little more than puffery or wishful thinking.” What’s more, he alienated most of America’s allies while sucking up to foreign dictators – as usual.

In a particularly jarring encounter, Trump met briefly with France’s new president, Emmanuel Macron. They shared a handshake wherein Macron stared Trump down and turned his tiny knuckles white. But it was after Trump departed that Macron made a much more profound gesture that exposed Trump’s innate weakness.

Macron invited Vladimir Putin to visit the opulent Palace of Versailles. While there they had frank discussions unlike any that Trump would have with his Russian friend/master. Macron raised contentious issues like Putin’s invasion of Ukraine and human rights abuses in Russia and Chechnya. He even directly challenged Putin over Russia’s hacking during the French elections.

When Trump returned to the U.S. he resumed his Twitter addiction with several familiar tweets chastising the media. Like a broken record, Trump railed against them as “fake” without citing any examples of reporting that was untrue. Now contrast that with Macron’s bold confrontation with Putin wherein he slammed the Russian leader’s dishonest media:

Had Macron been an American candidate he could have included Fox News. And while Trump forgives Russia’s brazenly false international campaign of slander, Macron comes right out and condemns it. Trump famously begged Russia to hack Hillary Clinton’s emails, then denied that Russia had anything to do with it. But a real president looked Putin in the eye and told him he wouldn’t stand for such unethical activities.

Having this ability to compare Trump to Macron gives us a rare opportunity to observe what a weasel America’s right-wing has embraced. He’s a coward who talks loudly but carries a big stick that he promptly hands over to our enemies. Anyone who still thinks that Trump is a strong leader is being willfully ignorant. A clear-eyed assessment of Trump in action can only bring a conclusion of fearful frailty in the service of his own selfish interests.