Wednesday’s news might have been been consumed by Donald Trump’s European “Embarrass America First” tour. However, a domestic news event took place that shoved the President out of the headlines temporarily. That may be beneficial to Trump who will get some relief from the tsunami of bad news that swirls around him. But the affair in Montana won’t do much to help the Republican Party’s prospects for maintaining control of Congress. 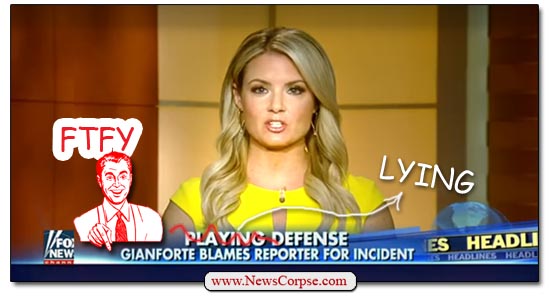 By now most of the nation has heard about Montana’s Republican candidate for Congress, Greg Gianforte. In response to a reporter’s questions about the GOP healthcare plan, Gianforte went apeshit crazy. He attacked Ben Jacobs, a reporter with The Guardian, by body-slamming to the ground. He has since been charged with a misdemeanor assault and had the three biggest newspapers in the state retract their endorsements.

Every news outlet has put this story in frequent rotation. That includes Fox News. However, there is a noticeable difference between the reporting on Fox and that of the other networks. It’s a difference that is especially puzzling considering the circumstances. Here is how Jillian Mele of Fox and Friends covered the assault Thursday morning:

That was an unusually dry report by Fox’s standards. Ordinarily Fox News hypes up the melodrama and slathers their coverage with conflict and controversy. For some reason, in this case they delivered a rather boring recitation of “facts” that featured the defense offered by the Gianforte camp.

What they left out, though, was pretty significant. At the scene of the assault there was a crew from Fox News. Their correspondent, Alicia Acuna, witnessed the whole thing. She later wrote an account of what happened and published it on the Fox News website. She said in part that:

“Gianforte grabbed Jacobs by the neck with both hands and slammed him into the ground behind him. Faith, Keith and I watched in disbelief as Gianforte then began punching the reporter. As Gianforte moved on top of Jacobs, he began yelling something to the effect of, ‘I’m sick and tired of this!.’ […] To be clear, at no point did any of us who witnessed this assault see Jacobs show any form of physical aggression toward Gianforte.”

According to Acuna there was no doubt that Gianforte initiated an unprovoked assault on a journalist who was just doing his job. But that didn’t make it into the Fox and Friends reporting. It would be a conspicuous omission on any other news network. But on Fox it’s perfectly aligned with their mission to defend and promote Republicans at all costs.

It wasn’t just Fox and Friends who buried Acuna’s reporting. The entire primetime lineup on Fox Wednesday night failed to mention it. Tucker Carlson, the co-hosts on The Five, and Sean Hannity all snubbed their fellow Fox reporter’s eye witness version of the take-down. It wasn’t until late Thursday morning, after Fox and Friends, that Acuna was recognized for the scoop she had. She was finally interviewed on air where she affirmed the hostile encounter just as she had previously described it.

There can only be one explanation for a “news” network neglecting an eye witness account by their own reporter. They were trying desperately to rescue the Republican barbarian who criminally assaulted a journalist. They wanted to deprive their already ill-informed viewers of critical information, keeping them blissfully ignorant. And in the end, they were complying with the anti-media agenda of their Psychopathic Messiah, Donald Trump, who slandered the media as “the enemy of the people.” Gianforte’s behavior was the ultimate manifestation of Trump’s campaign to denigrate and dehumanize journalists. It was bound to happen sooner or later, and will likely happen again as the right gets ever more desperate.