The White House has now been struggling with their atrocious handling of Rob Porter, the wife-beating aide to Donald Trump, for eight days. By repeatedly putting out lies and contradictory accounts they have assured that it gets more coverage than if they had simply told the ugly truth. And Trump’s stubborn refusal to show any concern for the victims of domestic violence only makes matters worse, even though it’s exactly what we expect from the serial Sexual-Predator-in-Chief.

To be sure, the story is important. It involves a deviant figure at the highest levels of government. One who hasn’t been able to obtain the necessary clearances for access to the classified information that is part of the job. He therefore poses a significant risk to national security, in addition to being disgusting thug.

So what is Fox News to do under these circumstances? Their mission being to glorify and defend the President at all costs is hitting a massive obstacle. They tried ignoring the story through much of their broadcast day, and especially on their primetime programs. Sean Hannity, Tucker Carlson, and Laura Ingraham have downplayed the Porter scandal from the start. And when they did bring up it up, it was only to try to protect Trump with embarrassing excuses and awkward praise.

That leaves only one other tactic to get Porter, and Trump’s association with sexual abuse, out of the headlines: Distractions. Consequently, if you visited the Fox News website Wednesday morning you would have found a peculiar story in the top spot that was hardly the most newsworthy item of the day. 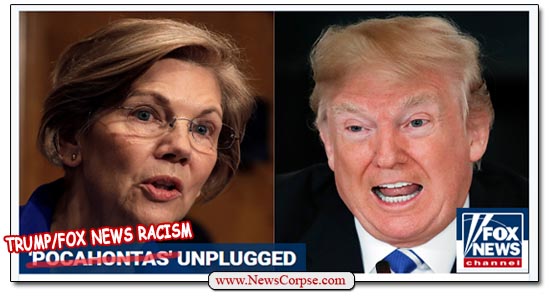 Sen. Elisabeth Warren gave a speech to the National Congress of American Indians. It was a lovely speech, although a fairly typical appearance by a senator during an election year. She talked about her family history, told the moving story of the real Pocahontas, and promised to be a voice for Native Americans in Washington. And she even took a swing at Trump saying that…

“Now we have a president who can’t make it through a ceremony honoring Native American war heroes without reducing Native history, Native culture, Native people to the butt of a joke.”

That was a reference to Trump’s disrespectful treatment of Native American war heroes at a ceremony meant to honor them. But her speech overall was by no means the sort of earth-shattering affair that would make it newsworthy enough to feature as the lead story. So Fox News dressed it up in the racism that has become integral to the Trump era Republican Party. The image that Fox News chose to run with the story revives Trump’s derogatory and juvenile use of the “Pocahontas” nickname he has attached to Warren.

Ignoring the demands of the Native American community to cease exploiting and insulting them, Trump and Fox continue to do so. It is a deliberate attempt to sow division and hatred and the disunity that is emblematic of the GOP. They rely on this sort of bigotry to inflame their base and to tear at the seams of the diversity that makes the country strong. And in this case, they are also cynically using it to shift attention from yet another Trump scandal that they can’t plausibly or morally defend.