The Office of the Special Counsel announced today that thirteen Russians have been indicted for crimes related to interference with elections in the United States. This is part of Robert Mueller’s investigation that has already produced indictments against Donald Trump associates Paul Manafort, Rick Gates, Michael Flynn, and George Papadopoulos (the latter two having pleaded guilty). This is a significant development that further exposes the unsavory connections between Russia and Trump. 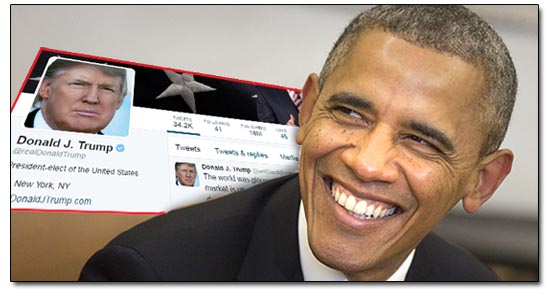 Therefore, it should come as no surprise that Republicans leaped out in front of the story to accuse the real culprit in this affair: President Obama. That’s right, despite there being no mention of the former president or his activities in the indictments, the GOP wants to make sure that the American people will nevertheless hold him accountable. Ronna Romney McDaniel, the chairperson of the Republican National Committee, told Fox news (of course) this shortly after Deputy Attorney General Rod Rosenstein made the announcement:

.@GOPChairwoman on Russians indicted for election meddling: "These indictments are very telling that the Obama administration lost sight of Russia during their tenure." @TeamCavuto pic.twitter.com/aCOzxAxp0L

That is perhaps one of the most ludicrous diversions from reality that the loony-right has made – well, this hour. There’s much more looniness to come. But for the record, it was the Obama Justice Department and FBI that led the investigations into the Russian activities and supplied most of the evidence that Rosenstein cited in his indictment. There is an argument to made that these affairs should have been made public sooner, but the Obama administration maintained an abundance of caution so as not to influence the election themselves. That’s a worthy topic for debate. However, what is not debatable is Trump’s response to the indictments:

Russia started their anti-US campaign in 2014, long before I announced that I would run for President. The results of the election were not impacted. The Trump campaign did nothing wrong – no collusion!

The fact that Russia began these operations before Trump’s candidacy only affirms that they have long been a hostile foreign entity who ought not to have been embraced as partners by the Trump campaign. Trump’s claim that the results of the election were not impacted is plainly false. All that Rosenstein said about that is there is no such allegation in this set of indictments. That’s not the same as saying it didn’t occur. It’s possible, even likely, that more indictments are still being prepared. Nevertheless, Trump reiterated his misreading of the indictments in an official statement saying that:

The President “is glad to see the Special Counsel’s investigation further indicates—that there was NO COLLUSION between the Trump campaign and Russia and that the outcome of the election was not changed or affected.”

Again, that is not what the indictments said. Particularly with regard to collusion. The indictments repeatedly refer to “the defendants and co-conspirators.” The co-conspirators are not identified at this time, but there are numerous references to contacts made by the Russian defendants and people in the Trump campaign. Contrary to the spin by Trump and Fox News, Bloomberg reports that “Mueller Still Investigating Possible Collusion, Source Says.” Trump is desperate to dismiss the apparent complicity of his campaign and thinks that simply saying it isn’t so will be enough to persuade his Deplorable base. And the GOP is similarly determined to advance that lie. Kayleigh McEnany, the RNC spokesperson tweeted that:

BREAKING: DOJ reveals Russians organized AGAINST Trump on Nov. 12th and 19th of 2016!!

She must not recall that the election was on November eighth. And if it’s her contention that the Russian interference was directed against Trump rather than for him, she should read the indictment that says:

Finally, State-Run TV (aka Fox News) was playing its part in the Trump propaganda offensive. The RNC’s McEnany rushed over to the Fox studios to spew the party line in the minutes following Rosenstein’s announcement. Her frantic spin was that “Today marks the day that the Democrats’ Russia collusion conspiracy theory unraveled,” and that “Democrats deceived this country and they were caught today.” Seriously, that was the official GOP take on the news that Russia had interfered with the election of Donald Trump – a contention that he has repeatedly said was a hoax.

Now that Trump is apparently conceding that there was interference by the Russians, will he correct his previous denials and apologize? Will he finally implement the sanctions that Congress voted for overwhelmingly? Or will he continue shield his pal Vladimir Putin from any consequences for having tried to destabilize America’s democracy. It’s notable that his response to these new indictments is focused solely on how they affect him. He cries, falsely, that there is no collusion. But he doesn’t once acknowledge the harrowing allegations that Russia was meddling in our election in order to destabilize our democracy. Isn’t he, by oath, supposed to be protecting and defending the Constitution, not himself?

In summary, according to Trump and the GOP, the Russians worked against Trump. The indictments prove that there was no impact on the election and that there was no collusion on Trump’s part. And that it was all Obama’s fault anyway. The lesson that America truly needs to learn from all of this is to “Just say ‘No’ to drugs.” And let’s hope these Republican junkies get the help they so obviously need. Because if they aren’t high, then they have much more serious mental problems.

Laura Ingraham has long been a vocal opponent of the First Amendment, particularly as it applies to entertainers and other creative or famous people. Fifteen years ago she wrote the book “Shut Up and Sing“ purporting to reveal “How Elites from Hollywood, Politics, and the Media are Subverting America.” In reality it was an extended diatribe against the free expression rights of anyone with whom she disagrees. It was a transparent attempt to silence some of the most effective and passionate communicators our society produces. And it is no coincidence that these complaints from Ingraham and other right-wingers is only directed at liberals. They frequently, and hypocritically, embrace conservative “celebrities” like Scott Baio, Ted Nugent, and ballplayer Tim Tebow. 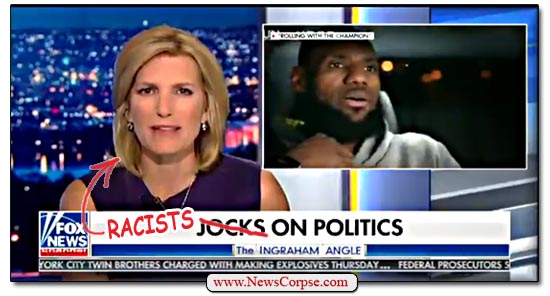 On Thursday Ingraham expanded the scope of her anti-speech mission to include blatant racism. On her primetime Fox News program she ventured into a loopy tirade that attacked basketball greats LeBron James and Kevin Durant (video below). The spittle inflected rant displayed her overt racism and disrespect for important voices of successful contributors to American society and culture.

The segment featured badly edited clips from an interview of James and Durant by Cari Champion. Ingraham began the piece with a demeaning tone by misrepresenting the interview as an ESPN podcast. In fact, it was produced by James’ own media company, Uninterrupted. It was not on ESPN, and it was not a podcast. Following those journalistic failures, Ingraham continued with her trademarked assault on personalities who dare to speak out. Ironically, the part of the video she highlighted (which is well worth watching in full) was actually talking about the responsibility of role models in politics, entertainment, and sports. The featured exchange began with Champion asking “How do you describe the climate for an athlete with a platform nowadays that wants to talk about what’s happening in our world?”

What surely rattled Ingraham was the part of James’ response that portrayed Donald Trump as “someone who doesn’t understand the people and really don’t give a f*ck about the people.” That’s a characterization that perfectly fits this president, and he proves it every day. He is a narcissist who was born into wealth and spent a lifetime avoiding and insulting the “little people” for whom he had nothing but disdain. His background of exploitation and prejudice is well documented.

Nevertheless, Ingraham lashed out against James and Durant with ugly slurs intended to belittle them. She described them as “barely intelligible, not to mention ungrammatical.” James discussed Trump’s racism noting that it was predictable to the point of being laughable. But he also agreed that it was “frightening” and that people shouldn’t become “numb” to it. Whereupon Ingraham mocked James with a Valley Girl “like” expression and asked “Must they run their mouths like that?”

Yes, they must. Especially because of people like Ingraham whose ignorance and bigotry actually affirms the criticisms that James and Durant put forward. She couldn’t possibly be a better example of the bias that permeates society at large and Fox News in particular. And her summation at the end of her screed closed the case on her contemptuousness:

“This is what happens when you attempt to leave high school a year early to join the NBA. And it’s always unwise to seek political advice from someone who gets paid $100 million a year to bounce a ball. Oh and LeBron, Kevin, you’re great players but no one voted for you. Millions elected Trump to be their coach. So keep the political commentary to yourself or, as someone once said, shut up and dribble.”

First of all, James graduated from high school. And his decision to join the NBA after that resulted in a remarkably successful career in sports and business. You have to wonder, has Ingraham ever criticized Bill Gates for dropping out of college? Secondly, James gets paid for winning. He gets paid for mastering both the physical and strategic aspects of a complex athletic enterprise. Ingraham is ignorantly diminishing the achievements of someone who has become a historic figure in his field.

Finally, if Ingraham wants to tout the millions of votes Trump got, she might also mention that Hillary Clinton got millions more. And also that he holds the distinct dishonor of having the lowest approval rating of any president on record. There’s good evidence that James knows more about the lives of average Americans than Trump ever will. And Ingraham’s repulsive and oppressive demand that he “shut up” is nothing more than a plantation master’s approach to uppity lessers who don’t know their place.

Laura Ingraham did an entire segment tonight about how LeBron James is dumb.