It’s time once again for the annual Conservative Political Action Conference (CPAC) put on by the American Conservative Union. This affair is a four day circle jerk of right-wingers wallowing in their muddy pit of country club white nationalism. And this year the roster of speakers has a particularly notable stench of political devotion that borders on religious idolatry. 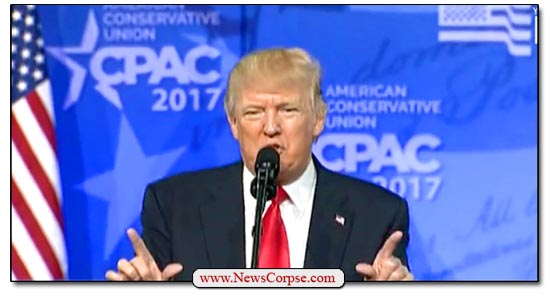 The largest contingent of conference guests comes from the White House. Beginning with Donald Trump himself making a return appearance, and extending down the line of command to various cabinet secretaries and political operatives. It’s a baker’s dozen of Washington apparatchiks who are committed to proselytizing the President’s agenda. And the sheer quantity of StormTrumpers shows that this convention has only one mission: Propaganda. Here are the White House attendees:

Joining the army of Trumpsters are their partners in propaganda, Fox News. A network that has the audacity to put the word “news” in their name is proving that they are nothing but shills for a corrupt presidency. The cadre of Foxies include two thirds of their primetime lineup. And they are supported by several paid contributors:

And that’s not all. There are several other people that will be familiar to Trump’s followers and Fox News viewers. People like “sheriff” David Clarke, John Bolton, James O’Keefe, and the GOP chair of the House Intelligence Committee (and future felon), Devin Nunes. Also, Wayne LaPierre of the NRA, whose name was omitted from the speakers list because he’s toxic. And let’s not forget Marion Le Pen, the leader of France’s neo-Nazi party.

Trump has been having a horrible week. He has had to deal with a top aide who was accused of wife-beating. He has exhibited his inability to respond like a human being to the tragedy in Parkland, Florida. He unleashed a torrent of tweets exposing how frightened he is about the tsunami of political and legal jeopardy he faces.

So he is undoubtedly looking forward to his appearance at CPAC. It’s an opportunity to get in front of an adoring crowd and pontificate incoherently for an hour and be applauded for it. The audience will cheer wildly as Trump lashes out at their favorite enemies – liberals, democrats, minorities and, of course, the media. They’ll rise to their feet whenever he utters a word about a wall or a former “crooked” opponent. And Trump will get his fix of adulation from his glassy-eyed disciples before he has to return the “dump” on Pennsylvania Avenue and lay in bed worrying about when special counsel Robert Mueller’s hammer will come down.

Once again, Donald Trump is caught convening with his “outhouse” cabinet (too crappy to be in the kitchen) on Fox News rather than knowledgeable professionals. The “Curvy Couch” potatoes of Fox and Friends delivered another of their “Presidential Daily Briefings” to the only person in their audience that matters to them. 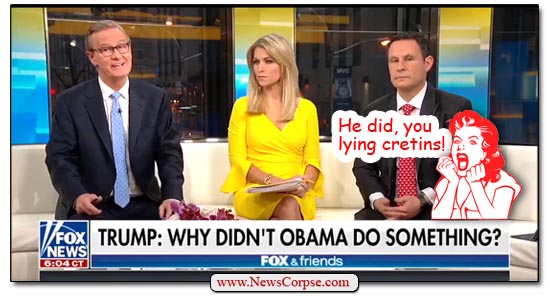 The segment (video below) reiterated a White House talking point meant to distract from the reality that Russia invaded the United States with a massive and well-financed attack on our democratic system. They advanced the lie that President Obama didn’t do anything about Russia’s election tampering. In fact, Obama did quite a bit. He expelled thirty-five Russian “diplomats” and imposed new sanctions. These were actions that Trump’s soon-to-be National Security Advisor, Michael Flynn, assured Russia would not be carried out if they won the election. Obama also tried to get Republican Senate leader Mitch McConnell to sign on to a bipartisan public announcement revealing the Russian operations. McConnell refused, and Obama thought it would appear political if he were to proceed without GOP support. It could be argued that Obama could have done more, but not that he did nothing, as Trump did in this tweet:

Thank you to @foxandfriends for the great timeline on all of the failures the Obama Administration had against Russia, including Crimea, Syria and so much more. We are now starting to win again!

Of course, Trump never has an original thought, and he didn’t in this case either. He was reacting to the policy dictates put forth on Fox and Friends. In addition to the tweet above, Trump also tweeted a quote that played on the Fox News program of Obama saying that…

“There is no serious person out there who would suggest somehow that you could even rig America’s elections, there’s no evidence that that has happened in the past or that it will happen this time, and so I’d invite Mr. Trump to stop whining and make his case to get votes.” …..

It needs to be noted that Obama was talking about Trump’s campaign hysterics that Obama and Hillary Clinton were conspiring to steal the election. He was not talking about the sort of tampering that we know Russia engaged in. That’s a significant distinction, but one that Fox and Trump are too dimwitted to figure out. Or more accurately, too dishonest to admit. So Trump’s “Friends” merely repeated their well-rehearsed lines:

Brian Kilmeade: If you look at the President’s track record, it’s been anything but strong when it comes to Russia. [Steve Doocy had to interject that Kilmeade meant President Obama]
Steve Doocy: But here’s the thing, ultimately. Barack Obama was the president of the United States when Russia was meddling with our election. Trying to sow discord. So why didn’t he, as the chief executive of the country, stop it? And now, fast forward to now, what’s the narrative become? Forget about the fact that it happened on Obama’s watch, now it is ‘Well you know it looks like the Trump campaign colluded with the Russians.’ Which there is no evidence, absolutely none that that happened. All we found out Friday with the Mueller indictment was there was this place called the troll factory. Spent about a hundred thousand dollars and put out a few Facebook ads. That’s it.”

First of all, there is plenty of evidence of Trump’s collusion, starting with Donnie Jr.’s meetings with Russians (which he initially lied about) in Trump Tower. There are verified connections between Trump, Wikileaks, and Russia, who Trump begged to hack Clinton and release the stolen emails. There are more than a dozen Trump associates who met with Russians and lied about it. And no one knows what further evidence special counsel Robert Mueller has that won’t be disclosed until he concludes the investigation.

What’s more, Doocy’s deliberate disinformation about Mueller’s indictments misstates the facts. It wasn’t a hundred thousands dollars and a few Facebook ads. It was over a million dollars a month and thousands of Facebook and other Internet posts seen by millions of Americans.

More importantly, Trump appears to be conceding now that the election interference did occur. And while he’s obsessing over Obama’s response, he’s ignoring that he has done nothing himself. To the contrary, he is letting his pal Vladimir Putin off the hook. Trump refuses to impose sanctions that were voted on nearly unanimously by Congress. And although he will criticize everyone from Obama to Clinton to Oprah, he has never said a cross word to or about Putin.

No matter what Trump thinks of Obama, he has a responsibility as the current president to protect and defend the country. But he’s never even had a cabinet level meeting on the threat of Russia’s election tampering. Nor has he directed his intelligence and law enforcement agencies to address the matter. If he thinks that Obama was negligent, then what is he saying about himself? It’s almost as if he’s happy with Russia’s political intrusions and wants them to continue. Or maybe that they have something on him that is costly to his financial empire or personally embarrassing. Nah – couldn’t be any of that. Could it?