One week ago a deeply disturbed young man entered his old school in Parkland, Florida, with an AR-15 and ended the lives of fourteen students and three adults. Ever since then the survivors and classmates of the victims have demonstrated a rare and inspiring resolve to make Marjory Stoneman Douglas High School the last site of a such a tragedy. If they succeed they will have beaten the odds, because survivors from Columbine to Sandy Hook have said the same thing. 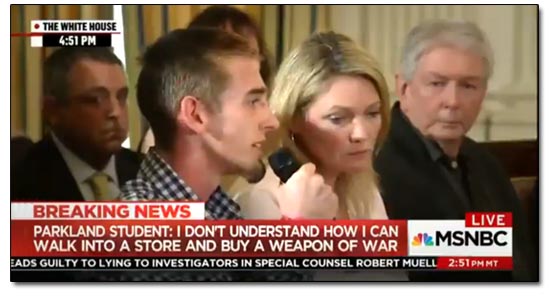 Many of the Stoneman Douglas students have made passionate and rational cases for taking military style assault weapons off the market. That solution has been predictably opposed by conservatives and NRA shills in Congress. And, of course, Donald Trump is siding with the obstructionists and mass murderers union. But one of the most galling responses to the demand for common sense gun safety reform is the notion that teachers should be put on the front lines by arming them with commensurate fire power.

That is maybe the most boneheaded solution imaginable. For one thing, it only makes the teachers more likely to be the first victims of the shooter. It also requires the teachers to turn their attention away from securing the students while they engage in a firefight. And it relies on the assumption that an armed teacher will be at the the specific location of the shooting with a weapon in hand. In real life scenarios that is an unrealistic assumption. The teacher might be in a different classroom. And their guns would probably be locked up for safekeeping. Since shootings like the one in Parkland usually last about three minutes, the tragedy would have occurred before an armed teacher could show up.

But what makes this suggestion so inappropriate as a potential solution is its narrow focus on schools. What would happen if every school in America were to be rebuilt as a fortress with armed teachers and security guards and snipers on the rooftops? Besides, that is, making our kids go to school in prison of war style institutions? If a shooter were to plot a mass murder under these circumstance, he would simply select a different target.

How would fortifying schools protect children who gathered at McDonalds on the way home after school? How would it protect them in the mall, or a concert, or at church, or at a playground in the park? Would all of those places also have to be re-envisioned as prisons with weapon-toting sales clerks and volunteer parents on patrol? Would American society be turned into one big gulag where any suspicious person might be gunned down by an overeager pseudo-cop?

Trump met with a group of students, parents, and teachers on Wednesday afternoon and told them that he supports concealed carry for teachers. He ignored entirely the subject of taking these weapons off the streets. The only other solution he proposed was for opening old-school mental hospitals where people with psychological problems could be held after being “nabbed” by the thought police. Bear in mind that the vast majority of people with mental illness are not dangerous or violent.

Why isn’t the media addressing these obvious flaws whenever the armed teacher solution is proposed? Our kids and country will not be safer because schools are converted into frightening destinations where learning would be nearly impossible. The only things that all of the potential sites for a massacre like the one at Stoneman Douglas High (or Las Vegas, or the Pulse nightclub, or the Sutherland Springs church) had in common was the means of execution and the tears of grieving friends and family.

No matter how many times the gun fetishists insist that guns are not the problem – guns ARE the problem. There may be many other facets of a comprehensive response, but the problem will never be solved until the weapons that produce the severity and quantity of casualties are removed from the equation. And that won’t happen until the NRA whores are removed from politics. That may be the silver lining that is being revealed by the brave and passionate Parkland students who are finally getting the voices of victims to be heard. Students like Samuel Zeif:

Crying Parkland student Samuel Zeif asks Trump how a person can go into a store and buy weapons of war with an expired ID, and why nothing has been done. pic.twitter.com/UUOa1UFwcB

In its ongoing mission to brainwash weak minds, Fox News is taking a major step into the video streaming business. They have announced that their community website and right-wing news aggregator, Fox Nation will soon become a subscription service that Fox’s glassy-eyed disciples can pay for without a cable account. 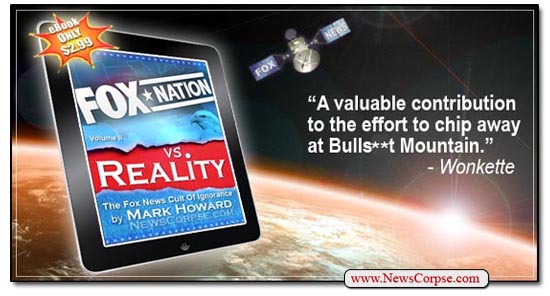 The announcement states that the new Fox Nation will launch by the end of the year with original programming rather than reruns of Fox News Channel content. But that doesn’t mean that Fox favorites like Sean Hannity and Tomi Lahren won’t be featured frequently to spin the news and stir outrage. These and other Fox regulars will be producing exclusive commentaries for the new venture. John Finley, Fox News senior vice president, described the new offering saying that…

“Fox Nation is designed to appeal to the Fox superfan. These are the folks who watch Fox News every night for hours at a time, the dedicated audience that really wants more of what we have to offer.”

In other words, the network that is devoted to misinforming America is providing their wingnut junkies with an endless supply of moonbat juice to keep them riled up and free from the emotional complexities of reality. This is just what the person who already watches Fox News for hours needs. And the persons they are most likely catering to are superfans like Donald Trump. These zealots will surely appreciate how the new Fox Nation will “take a further look at the big issues of the day” and provide an opportunity for “interaction with all of FNC’s popular opinion hosts and personalities.”

The Fox News announcement heralded this new enterprise in terms that will be familiar and comfortable for their faithful devotees, noting that “insiders consider Fox Nation another step toward digital supremacy.” And whatever other types of supremacy they favor will be icing on the cake.

Fox Nation has long been a website that catered to the most extreme rightist crackpottery. They have posted links to articles by notorious conspiracy theorists and dedicated propagandists. They have altered headlines and content to comply with the conservative doctrines they espouse. And they have not been averse to spewing outright lies, as documented in my two books: “Fox Nation vs. Reality: The Fox News Community’s Assault On Truth” and “Fox Nation vs. Reality: The Fox News Cult of Ignorance.” (Both available on Amazon). And there is no reason not to expect exactly the same sort of news distortion and purposeful deception from whatever the new Fox Nation turns out to be.