The propaganda push to clear Donald Trump of all responsibility for the Russian interference in the 2016 election is in full force. The chair of the Republican National Committee has blamed it all on President Obama. Fox News is trivializing it as Rocky and Bullwinkle stuff. And now the White House Deputy Press Secretary, Hogan Gidley, is making statements that baselessly allege crimes by Democrats that are worse than what the Russians are alleged to have done. 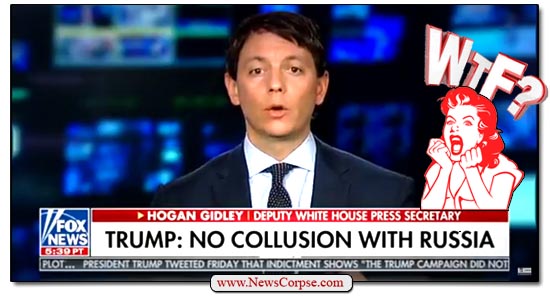 On Saturday morning’s episode of Fox and Friends (where else), Gidley was stroked – I mean interviewed – by the “Curvy Couch” potatoes in a segment that addressed the indictments against Russia by special counsel Robert Mueller. Gidley’s remarks were so offensive and dishonest that I’ll just leave them here with little commentary (video below):

“First of all we have to understand, this began in 2014 under then-President Barack Obama’s nose. He didn’t do a thing about it. Long before Donald Trump announced for president this was going on. Also it points out clearly that in this process there was no collusion, as you just pointed out. The President said it multiple times. This makes it clear and concise for the American people and proves the President correct. No collusion between Donald Trump, his campaign, and Russia. And also, I think this is important too. It did not affect the outcome of the election whatsoever.”

First of all, what we really have to understand, is that the fact that Russia began interfering in American elections in 2014 does not vindicate Trump. It actually makes it worse that he and his associates had anything to do with foreign operatives who were already engaged in espionage against the United States. And the Mueller indictments do not in any way say that there was no collusion or that the outcome of the election was not affected. They simply say that these particular indictments are not alleging that. Which leaves the door wide open for such allegations in future indictments.

But if Gidley wants to assert that Mueller is proving Trump correct, that’s fine. It makes it that much harder for them to later say that Mueller is biased and try to fire him. However, Gidley had not yet reached the most disgusting part of his interview. He continued:

“What the Russians were trying to do, as outlined by Deputy Attorney General Rosenstein, was create chaos in the American election system. And I’ll just say this: There are two groups that created chaos more than the Russians. That’s the Democrats and the mainstream media who continued to push this lie on the American people for more than a year. And, quite frankly, America should be outraged by that.”

Really? So Gidley is now contending that Democrats and the American media are more guilty of election tampering and fraud than the Russians who have just been indicted by a Grand Jury? He is essentially accusing Democrats and journalists of being a bigger enemy than Russia, and of criminality on a scale that exceeds actual spies from a hostile foreign nation. And the twerps on Fox and Friends just sat there and nodded in agreement. The whole bunch of them are so determined to exonerate their beloved Orange Messiah that they are willing to make scurrilous accusations of treason. It’s an attack on both democracy and the free press. And it’s another new low for the Trump White House.

.@hogangidley45: The Russia investigation has proven President Trump correct, there was no collusion between Trump, his campaign and Russia and this did not affect the election pic.twitter.com/4RtBgbyec7

In the hours following special counsel Robert Mueller’s latest set of indictments, there has been flurry of frantic activity over at Fox News. The desperation of Donald Trump’s phalanx of sycophants rushing to his defense is thick enough to slice with a scimitar. When they aren’t celebrating Trump’s imaginary vindication, they are insisting that the charges are meaningless. To these bipolar shills Mueller has either produced a profound success or a pitiful failure. Or, of course, it was all Obama’s fault. 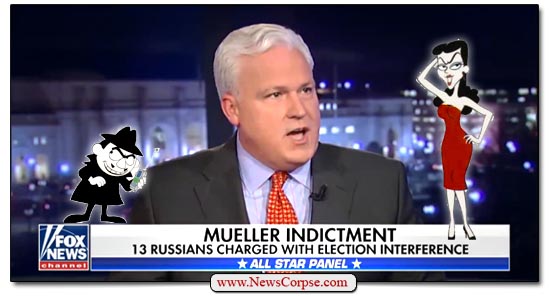 Case in point: On Special Report, the afternoon Fox program that is cited as its flagship “news” hour, they hosted a hard-boiled Trump supporter who demonstrated the absurdity of wingnut media. Matt Schlapp is the chairman of the American Conservative Union and is married to Mercedes Schlapp, the White House Director of Strategic Communications. In a fit of pique that threatened to burst a blood vessel, Schlapp offered a unique simile to illustrate his opinion of the Mueller indictments (video below):

“This is rather absurd. This is like Rocky and Bullwinkle kind of stuff. When I think of Russian collusion in our elections I am offended. I think it’s repulsive. Is this what it was? It was thirteen guys having some rallies?”

Boris and Natasha must be laughing their cartoon asses off. Schlapp’s attempt to trivialize these charges is an anguished plea for help. His first blatant cognitive lapse was to mistake that the thirteen indictments means there were only thirteen participants in the Russian operation. Rest assured that the White House, despite their outer dismissals, is not amused. These are serious violations of the law and they imply further legal jeopardy for the President and his crime family.

But never mind that. Reality is fungible to the goons who make up the Trump Defense League. This outburst by Schlapp is typical of the imprimatur that Fox News wants so badly to stamp on this affair. That’s why he goes unchallenged by guest host Mike Emanuel. Schlapp’s main point that the whole Russian espionage campaign was a silly plot devised by a small band of losers is a lie that is explicitly addressed in the indictment which states that hundreds of people were involved with an annual budget of millions of dollars:

“The ORGANIZATION employed hundreds of individuals for its online operations, ranging from creators of fictitious personas to technical and administrative support. The ORGANIZATION’s annual budget totaled the equivalent of millions of U.S. dollars.”

No one on Fox News corrected this material falsehood. Which explains why Fox News viewers are so clueless about the facts of pretty much any topic that is covered by Fox. The network deliberately misinforms their audience and leaves them to wallow in ignorance.

Schlapp continued with his disinformation rant by shifting the blame to the right’s favorite black president/villain saying that “Obama should have stopped it.” And he concluded by saying that undermining the foundation of our nation’s democracy “is not worth a year of the country’s time,” and that the charges are “ridiculous and not true.” He is so adamant in his arguments that you have to wonder if he is now serving as the defense counsel for the indicted Russians?

If so, Schlapp would have to take a backseat to Trump, who has been litigating the innocence of Putin’s spies for more than a year now. However, these indictments prove that Russian meddling in the 2016 election was not, as Trump whines, a hoax, or a witch hunt, or fake news. It is a cyberwar, and any complicity on the part of any American is treason.

.@mschlapp on Mueller indictment: "This is not worth a year of the country's time over everything else that we have to deal with…these charges of Russian collusion, it's clearly been ridiculous and not true." #SpecialReport pic.twitter.com/MZz1gvs8mH

Full video of the segment from Fox News can be seen here.