For a network that has the word “news” in its name, Fox manages to routinely dwell on trivialities, distractions, and outright fictions. Well known for their obsession with missing white women, the so-called journalists at Fox are also consumed by negativity as documented by the Center for Media and Public Affairs. Their new study reveals that the press in general has been overwhelmingly negative when reporting on Barack Obama, but Fox News steps it up a level or two:

This rampant negativity, however, is reflected in their ratings, which have consistently underperformed compared to their competitors. 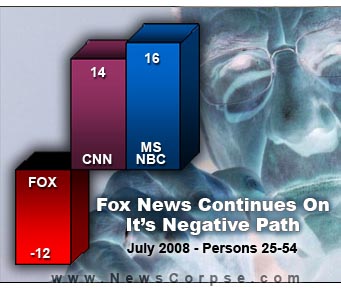 Fox showed declines in almost every time period and demographic group, but was particularly lower in the all-important 25-54 demo. This ratings performance may be a hopeful sign that the free market in television viewership (such as it is) may actually be working. At least with respect to viewers tuning out Fox’s brand of propagandistic drivel.

A recent example of the nonsense Fox peddles as news is a report based on a story published in the Wall Street Journal, another Murdoch entity. The Journal posed a question that is surely topmost in the minds of voters: Is Barack Obama “Too Fit to Be President?” In this allegedly serious study of electoral considerations, the Journal asks if…

“…in a nation in which 66% of the voting-age population is overweight and 32% is obese, could Sen. Obama’s skinniness be a liability? Despite his visits to waffle houses, ice-cream parlors and greasy-spoon diners around the country, his slim physique just might have some Americans wondering whether he is truly like them.”

By broadcasting its version of the Journal’s article, Fox pulled a twofer. First, they got to disseminate additional commentary that disparages the Democratic candidate. But they also got to further the utterly idiotic idea that a president must aspire to some notion of American Averagism. And apparently the general consensus of the press is that the average American is a fat, beer-swilling, uneducated, gun-toting, evangelical. Politicians who are too healthy or well-informed are only spotlighting how different they are from “ordinary” citizens and are, therefore, disqualified from public service.

That’s the real negative for America, courtesy of Fox News.

One thought on “The Negativity Of Fox News”