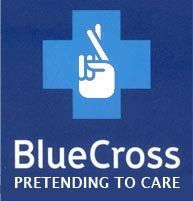 Earlier this week I had a minor medical emergency. It was nothing life threatening, but it was not insignificant. The resultant encounter with the healthcare insurance system was nothing short of insanity. Had this been a more serious malady someone might have died, and no doubt some have.

When I determined that I needed to make an emergency appointment with a medical provider, I called my insurance company, Blue Cross, and asked if I could see a doctor who was not my assigned provider, but who was more convenient at the moment. After some discussion, that merely demonstrated how difficult it is to get them to understand simple requests, I was told that because this was an emergency, it would be OK. Thus began my ordeal.

When I arrived at the doctor’s office, they told me that they had spoken with Blue Cross and were told that I would not be covered for services there and that I needed to call the insurer. When I finally reached them they advised me that there was no record of my being told that I could visit this provider and that, in any case, if I was told that that it was wrong. This led to a series of arguments that included several telephone agents and supervisors. On several occasions they put me on hold for twenty minutes or more. After more than two hours they indicated that they would not make an exception and that I must see my assigned provider who was thirty minutes away on the other side of town. Bear in mind that I am still waiting to receive care for an emergency.

So I return to my car (that has been ticketed because it was over the two hour limit) and make a call to my assigned provider. I get a recorded message that says that the phone number I dialed is not in service. I double checked it three times. Same recording.

So I call back Blue Cross and explain that I can’t reach my assigned provider to make an appointment and ask again if I can receive treatment at the office I was already sitting in. The answer is still no, even though they confirmed that the provider was not reachable. This leads to another round of arguments and escalations to supervisors.

This is the insane part. As a self-employed artist, I’m paying my own healthcare premiums. But apparently I’m paying for something that they have no obligation to provide. They insist that I have to see a provider that seems not to exist. And they won’t let me change to provider that does exist and is ready to treat me. What the hell am I paying for? They are telling me that the only provider I can see is one that can’t be reached. At one point they suggested that I should drive across town to ascertain whether or not the provider’s office is there. I’m waiting for emergency care and they want me to be their field investigator.

I continue trying to persuade them that they have to let me see somebody. What would stop them from assigning all of their customers to phantom providers and never have to pay a cent in coverage? This time, while speaking to a manager, my cell phone battery dies. It has been four hours since I first started talking to them about getting a little emergency care. When I find another phone to use, I speak with a manager who says he will see if he can switch me to a new assigned provider (DUH!) and call me back. Half an hour later, the doctor’s office I have been sitting in for four hours receives a call telling them that they can treat me and that it will be covered.

As I noted above, my problem was not life threatening. But there are surely others who go through bureaucratic torture like this who have much more on the line. These sort of situations should never occur, but with the current healthcare system in this country they are inevitable. Health insurance is a legalized protection racket that requires that you pay them to keep from being financially ruined. But like all criminals, they cannot be depended on to keep their word or comply with their contractual obligations. Why should they? They are the sole arbiters of the agreement. Blue Cross, in particular, has had other well-publicized events where they unlawfully dropped coverage for patients who had the audacity to get sick and file a claim.

I have always advocated universal health care. Fortunately for me, it has always been from a position wherein I was not in need of much of it myself. This experience is a vivid affirmation of my commitment to a more humane system of care that puts the patient before profits.

But my ordeal is not really over. The coverage that I was eventually granted is still woefully under funded. My portion of the cost will still be be several thousand dollars that I don’t have. For the first time in my life I am now indebted to my credit card, the only means I had of paying. So this is still going to haunt me for some time to come. If anyone reading this is of a mind to help, there is a virtually painless way to do so. I will not ask for charity or donations. But I will remind you that you can purchase products from Crass Commerce, my business site. So while helping me to recover from a medically driven indebtedness, you can enjoy, for example, your very own John McCain NOPE stickers or t-shirts.

8 thoughts on “Health Insurance Is A Protection Racket”