It has been well documented that Fox News deliberately lies whenever it suits their extremist, Teabagging, partisan purpose. They have told innumerable falsehoods about everything from ACORN to Climate Change; from Iraq to Benghazi; from Obama’s religion to his politics to his birthplace. But now it is apparent that Fox cannot even be trusted to tell the truth about the most basic and innocent of facts. 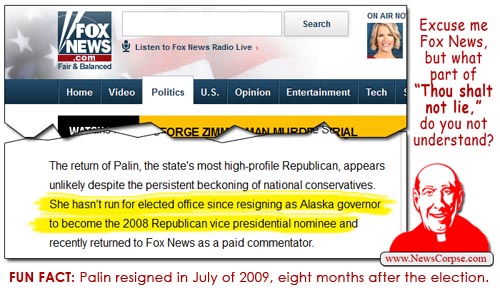 In a story about the race for senator in Alaska, Fox News was ostensibly reporting on the emerging and contentious battle for the GOP nomination. Palin’s name was brought up mainly to dismiss her as a possible candidate due to, among other things, her recent re-signing with Fox News as a paid contributor. But when referencing her, Fox described the now infamous tale of her quitting her job as governor barely half way through the term. Here is how Fox portrayed that event:

“The return of Palin, the state’s most high-profile Republican, appears unlikely despite the persistent beckoning of national conservatives. She hasn’t run for elected office since resigning as Alaska governor to become the 2008 Republican vice presidential nominee and recently returned to Fox News as a paid commentator.”

Of course, anyone who was not strung out on Oxycontin or some other mind-altering substance (which eliminates Rush Limbaugh), knows that Palin didn’t resign her post until July of 2009. That was eight months after she had already lost the election in November of 2008, and eleven months after she was offered the VP slot on the McCain ticket.

Clearly Palin did not resign as governor “to become the 2008 Republican vice presidential nominee.” So Fox was off by nearly a year on the timing of Palin’s bailout. Fox was also off as to the reason, because Palin stated in her own announcement that she was resigning to avoid further trouble and expense resulting from numerous ethics violations investigations which she was undergoing in Alaska.

It is understandable, although still despicable, that Fox would resort to dishonesty about political matters. They are devoted to advancing their rightist agenda and since they can’t do so honestly, they lie. But what on earth compels them to lie about something for which their is no apparent benefit? The only plausible answer is that they have just become so accustomed to lying that they do so as a matter habit. It is such a routine behavior for them at this point that they simply have lost the ability to grasp the difference between truth and lies. Lucky for them, their audience is no more concerned about truth than they are, and will remain loyal, if ill-informed, viewers.