In a press conference in Tanzania, the National Report notes an extraordinary exchange between a journalist from the Associated Press, Ramona Darlington, and President Barack Obama. According to the Report, Darlington asked Obama to explain what the profile of an American domestic terrorist is. Obama’s answer will surely raise the ire of the Tea Party and their members:

“Typically domestic terrorists in the U.S. are people who cling to obsolete beliefs from the time of the American Revolution. They are conservative Christians, reactionary Republicans and conspiracy theorists many of whom belong to racist hate groups. […] Tea Partiers commonly own guns and stock up ammunition and food in anticipation of starting another civil war to overthrow the will of the governing body who represent all of the American people.”

This is a shocking statement coming from the President of the United States. Sure, the Tea Party has much in common with the Taliban and other violent extremists. They both believe that religion should be the foundation of government. They are both virulently anti-gay. They would both enforce a submissive role for women who must not be permitted to make decisions about their own bodies. They both have a perverse obsession with guns. They both advocate overthrowing the secular governments that they despise. And while these similarities are apparent to objective observers, for the President to express these thoughts openly is astonishing. 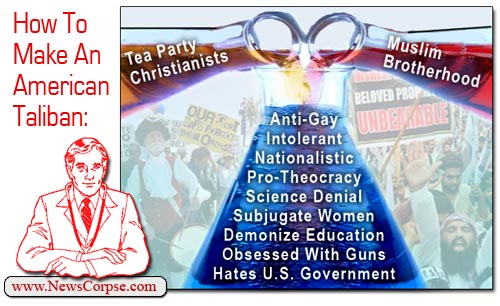 Naturally, the mainstream media has suppressed the reporting of these controversial remarks. Why would they do that? Could it be because they are in the tank for Obama as conservatives have long argued? Or could it be that the source of the story, The National Report, is an obviously satirical web site and that the whole thing was a joke?

Despite all the evidence that the story is a fake, many on the Tea Party right have taken it to heart and are outraged that the President said these things that he never actually said. The story has already been picked up by FreeRepublic, TeaParty.org, TruthAboutGuns, and a popular Ron Paul fan site, the DailyPaul. These geniuses must have failed to notice the conspicuously comedic content filling the site’s home page. Here are samples of their current articles in addition to the one about the terrorist Tea Party:

Since this wasn’t enough to alert the Tea Party dimwits to the fact that the site peddles parody, they might have avoided making asses of themselves by reading the site’s rather humorous disclaimer:

“National Report is a news and political satire web publication, which may or may not use real names, often in semi-real or mostly fictitious ways. All news articles contained within National Report are fiction, and presumably fake news. […] Advice given is NOT to be construed as professional. If you are in need of professional help (and you may be if you are on this page), please consult a professional.”

Was that too vague as well? Then perhaps the Teabaggers should have done just a modicum of research whereby they would have discovered something that was later noted by a spokesman for the Associated Press:

“There is no AP reporter named Ramona Darlington, this is not an AP story and as best as I can tell, a few people have been had.”

This is fairly typical for the great thinkers of the Tea Party. They repudiate the science that overwhelmingly proves that Climate Change is occurring and is caused by humans. They reject evolution and cling to the biblical myth that the Earth is only 6,000 years old. And they have fallen for similar scams that range from Obama being a Muslim from Kenya, to FEMA building concentration camps, to the health care law creating death panels, to government plotting mass gun confiscations, and on and on.

Consequently, it isn’t much of stretch for them to buy into this phony news story. It presents a ridiculous notion that they want to believe so badly that it doesn’t matter whether or not it’s actually true, or even plausible. And that pretty much sums up their entire political philosophy. They’re wrong on the economy. They’re wrong on taxes. They are hysterically off-kilter on the Constitution, despite their neato costumes. And they are an imminent danger to satirical sites like the National Report because they are funnier in their own ineptness than anything a good satirist can invent.