There has been a mini-furor swirling around part of Russian President Vladimir Putin’s op-ed in the New York Times. It was mostly a fairly tame composition that called for reflection and diplomacy. However that didn’t stop right-wing blowhards from waxing apoplectic, seemingly outraged that Putin had the audacity to express himself publicly. And the height of his hubris, in the view of conservative thought-nannies, was his criticism of that stale symbol of superiority, American Exceptionalism.

Putin: It is extremely dangerous to encourage people to see themselves as exceptional, whatever the motivation. There are big countries and small countries, rich and poor, those with long democratic traditions and those still finding their way to democracy. Their policies differ, too. We are all different, but when we ask for the Lord’s blessings, we must not forget that God created us equal.

How can the theo-con rightists take issue with that? By doing so they abandon principles they ordinarily regard as core to their philosophy. Neither their spiritual idols nor their nearly spiritual fixation on the “Founders” can live harmoniously with the concept of exceptionalism. What would Thomas Jefferson, author of the Declaration of Independence and its assertion that “all men are created equal,” have to say about this?

The truth is that American Exceptionalism is another way of saying American Supremacy. The campaign for such a concept is as repulsive as Hitler’s doctrine of a Master Race. The notion that one group of people, on the basis of their nationality, are better than others, is as odious as one group asserting superiority on the basis of skin color. The original meaning of the phrase had more to do with defining Americans as an “exception to the rule.” It was modern bigots who perverted it into an expression of overarching greatness. 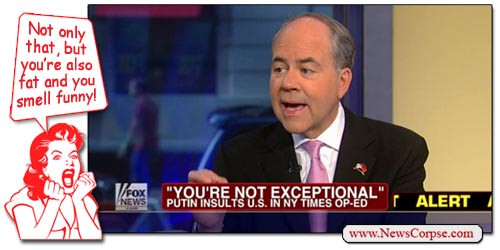 Not surprisingly, Fox News is leading the parade for American Supremacy, as they have done for years. This morning, Fox & Friends aired a segment that touched on Putin’s remarks (The segment was also featured as the lead story on the Fact-Free Fox Nation web site). But Fox legal analyst Peter Johnson, Jr., and host Steve Doocy were barely coherent as they slid over to a more general discussion of a Syrian intervention and how Putin’s commentary makes it more likely:

Johnson: What’s happening, and I don’t know if Mr. Putin wants to do it or not, but he’s provoking a lot of Americans into a position that maybe, maybe they should be in agreement with the President’s decision to strike Syria. […] If they keep it up, then they will push America to the brink of a Syrian attack. I don’t know if that’s the intended consequence or not, but that will be the effect.

If you had trouble making sense of that, you’re not alone. Johnson has somehow formed the opinion that Putin might want the U.S. to attack Syria. How he comes to that conclusion is puzzling, to say the least, and is nowhere in his comments. Putin, of course, has no incentive to support a strike on Syria and, in fact, has been vociferously against it. Indeed, his opposition was the central theme of the New York Times op-ed that Johnson and Doocy were discussing:

Putin: The potential strike by the United States against Syria, despite strong opposition from many countries and major political and religious leaders, including the pope, will result in more innocent victims and escalation, potentially spreading the conflict far beyond Syria’s borders. A strike would increase violence and unleash a new wave of terrorism. […] Syria is not witnessing a battle for democracy, but an armed conflict between government and opposition in a multireligious country. There are few champions of democracy in Syria.

The one thing Putin left out of that passage was that amongst the many countries having a strong opposition to a strike is the United States. Polls show the American people want no part of another conflict in the Middle East. Putin’s words might just as easily come out of the mouths of Republicans like Rand Paul, Ted Cruz, and any random Tea Party pundit. And to top it off, lefties like Sen. Bernie Sanders, Rep. Alan Grayson, and MoveOn.org are just as adamantly opposed.

Warning: Any attempt to find any logic or cognitive consistency in any of the above summation could result in a severe brain hemorrhage, loss of consciousness, and permanent cerebral disability.