The Senate’s most prominent opponent of ObamaCare, Ted Cruz (TX-Teabagger), has been battling ferociously to defund or otherwise dismantle the President’s signature policy achievement. Today he may have finally come up with a winning strategy to defeat the health care law upon which he is so fixated.

Cruz’s new blueprint for overcoming the enormous odds against his obstructionism was articulated shortly after he took to the Senate floor and said “I intend to speak until I am no longer able to stand.” With that pronouncement, Cruz launched into a soliloquy that is still unfolding at this hour. 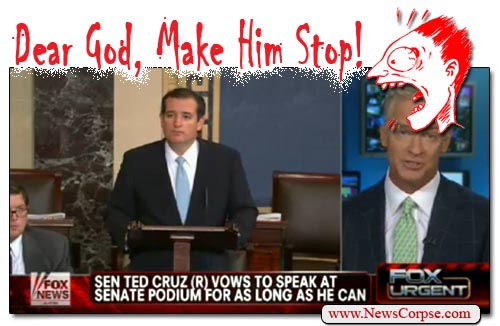 Never mind that there is no one in the Senate listening, and that no one is watching on CSPAN, and that Fox News is only airing occasional snippets, Cruz is confident that this stunt will turn the political tide in his favor. And forget about the fact that his Senate colleagues are embarrassed and irritated by his antics, and that he is rambling incoherently, and that there is no chance that he will affect the legislative process or change anyone’s mind. And, finally, set aside the reality that his phony filibuster is scheduled to end due to Senate rules that are already in effect and will require him to shut his mouth for a scheduled vote on the bill he is pretending to delay.

None of that is significant when weighed against the underlying brilliance of his scheme. By threatening to go on speaking for an indeterminate amount of time it is possible that just the grating sound of his voice, and the annoying ignorance of his arguments, could result in unprotected bystanders caving in to his demands just to get him to shut the hell up. Having to endure his monotonous blabbering is a form of torture that might be too much to bear.

This legislative hokum will prove to be a real test of the mettle of members as they attempt to withstand the unyielding pain and suffering of exposure to Cruz’s rhetorical weapons of crass discussion. But if they can survive the assault, Cruz will be effectively rendered impotent – at least until he spots another television camera.

[Update:] We made it! Cruz finished his rant without crushing us with his droning blather. Interestingly, Majority Leader Harry Reid advised Cruz that he could continue speaking an additional hour, but Cruz declined. Perhaps it’s because he had a previous engagement to appear on the Rush Limbaugh radio program. Priorities, you know. And naturally, the Lie Factory Fox Nation lived up to their reputation with this bullcrap: 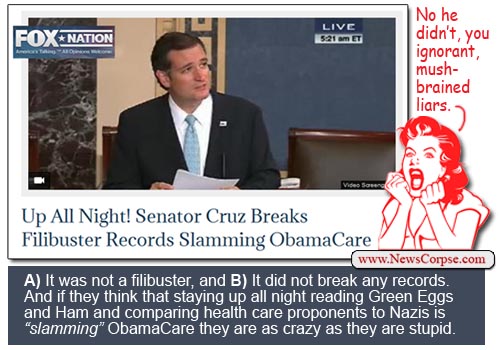 9 thoughts on “The Ted Cruz Plan To Kill ObamaCare: Speak Until He Can’t Stand”