House Republicans have succeeded in shutting down the government, a goal they have had for decades stretching back to Grover Norquist’s famous and heartless yearning to shrink it until it’s small enough to drown in a bathtub.

In the course of the debate there has been some dispute about whether the last election was a sufficient referendum on the Affordable Care Act (aka ObamaCare). Republicans persistently assert that the American people oppose the law and that it should be repealed to conform with their wishes. Conveniently left out of this argument is the fact that the law was passed with a super-majority in both houses of congress and signed by a popularly elected president. It later passed constitutional muster according to a conservative leaning Supreme Court. Finally, President Obama was reelected by a significant margin. And while polls about ObamaCare seem mixed, they rarely take into account that a fair percentage of unfavorable sentiment is actually people who think the law did not go far enough and would prefer a single-payer plan.

Nevertheless, that hasn’t stopped the GOP from pretending that the election had nothing to do with ObamaCare and was not an affirmation of the people’s support. These Tea Party history revisionists might want to sign up for ObamaCare so they can get medical attention for their severely short-term memories. 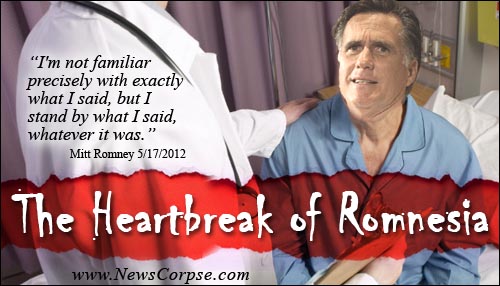 Mitt Romney had made repealing ObamaCare a key factor in his vain pursuit of the White House. He spoke about it on almost every campaign stop. And he did not mince words. Here are just a few examples of his pointed rhetoric:

Apparently the American people declined to join Romney on his mission to repeal ObamaCare. Obama won by more than five million votes. And what is abundantly clear is that Romney had thrust the health care law into the forefront of the campaign. Anyone who attempts to dismiss the prominence of it as an issue is deliberately lying (I’m looking at you, Fox Nation). And if these comments by Romney are not convincing enough, he also produced an ad in the thick of the campaign blasting ObamaCare and making this promise: “Day One. Job One. Repeal ObamaCare.”

Just to reiterate – “Day One. Job One. Repeal ObamaCare.” That hardly seems like an issue that was an afterthought in the Romney Campaign. So America was presented with a choice that was focused on this very subject. They made their choice and now they are just beginning to discover the rewards of having made the right one.

That is what is so terrifying to the Republican Party. If they really believed that ObamaCare would be a disaster, they would allow it to proceed and fail, and then they would ride a wave of support into a senate majority next year and the White House in 2016. Instead they are putting up roadblocks, disseminating disinformation, and trying to persuade people not to enroll. Because they know that once people see what the program actually provides, they will not only be excited and grateful, they will lobby their representatives to expand it.

So remember that the more you hear Republicans slamming ObamaCare and trying to prevent its implementation, the more you know they are running in fear of a law that they themselves believe will be popular and will help millions of people. And if there is one thing Republicans hate, it’s helping people, because – you know – socialism.

7 thoughts on “Sorry Tea-Publicans: America Made Its Choice And ObamaCare Won In A Landslide”