On Friday’s episode of “The Real Story” on Fox News, host Gretchen Carlson introduced an ominous new strain of fear mongering to intimidate Americans from learning more about how the Affordable Care Act (aka ObamaCare) can benefit them. Fox News is so terrified that people will discover how much there is to gain by enrolling, that they continue to invent ever more frightening tales of horror. 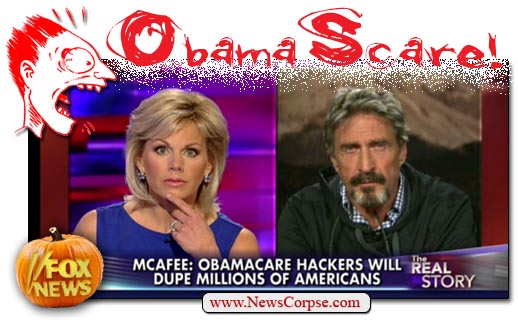 Carlson’s guest for the segment was John McAfee, the notorious developer of the anti-virus software company, who is presently a fugitive from a murder investigation. Carlson introduced McAfee with a declarative statement that enrolling in ObamaCare is dangerous because “Hackers could easily steal your identity. You could even lose you life savings if you do sign up.”

Oh my! That sounds awful. Pack up the kids Mabel, we’re moving to our bunker in Idaho where we stashed the gold bullion and freeze-fried moose stew. Fox News has confirmed that legions of hackers will be stalking innocent health insurance consumers to bleed them dry and deliver their souls to Satan.

This wild assertion that visitors to HealthCare.gov are going to be victimized by hackers is designed to frighten people away from the web site. Fox News has embarked on a full scale assault against ObamaCare with false allegations of higher costs, reduced service, death panels, national deficits, and even allusions to slavery. Their goal is to steer enough gullible viewers away from participating in order to engineer the program’s failure. And now they are deploying their latest tactic, fear of a malicious army of identity thieves.

During the interview, Carlson raises the specter of outlaw hackers laying in wait on the ObamaCare web site. However, neither she nor McAfee actually provide any evidence of such a threat. In fact, when directly asked about it. McAfee diverts from the question and lays out a completely different threat that has nothing whatsoever to do with the ObamaCare web site:

“There are no safeguards to prevent anyone – you, me, anyone who can develop a web site that only costs a couple of hundred dollars – and pretend to be an examiner, an agent, and you can log on, I’ll ask you for your Social Security number, your date of birth, everything I need to an hour later empty your bank account. And this is going to happen, and it’s going to happen very soon. Nothing in the ObamaCare system safeguards against this.”

To be clear, McAfee is not talking about any flaw or security risk to users of HealthCare.gov. He is saying that other nefarious individuals could set up their own unaffiliated web sites in the hopes of luring naive people of whom they will seek to take advantage. Of course, that is a threat that exists every day for every web site, and has since the Internet began. It has absolutely nothing to do with the ObamaCare site and does represent any risk to its users.

In short, if you give your Social Security number to a fake web site, or the widow of a Nigerian prince, it isn’t Obama’s fault. And the fact that Fox News will lie about this so brazenly is evidence of how scared they are that most Americans are going to appreciate having access to affordable health care for the first time. They are going to appreciate declining costs and lower national deficits. And they are going to remember who it was that threw every obstacle they could find in the path of these reforms when they go to the polls in November 2014.

8 thoughts on “OBAMA SCARE: Fox News Warns That If You Sign Up For ObamaCare Hackers Will Steal Your Life Savings”