Fox News presents itself as the red, white, and bluest cable news network the world has ever seen. They savor their Patriopathic zeal and wear their jingoistic bias as a badge of honor. Of course, it’s all a disingenuous affectation manufactured to lure in gullible tea-billies that Fox whips into a frenzied mob to oppose our socialist, Muslim president from Kenya. That makes it all the more blatantly hypocritical when those Blockhead Brigades march on the Capital to protest a government shutdown that was planned and executed by the Tea Party right. 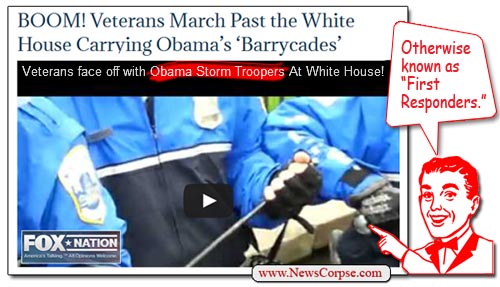 The Fox News community web site and Fib Factory, Fox Nation, posted an item celebrating the “Million Vet March,” that only managed to attract a few hundred marchers. The event was a sorry spectacle despite having star attractions like Sarah Palin and Ted Cruz topping the bill. Protesters expressed their outrage that several war memorials were closed due to the shutdown. So they “stormed” through barricades that could be easily pushed aside, and milled around the memorials without paying much attention to them. Later they carried the portable barricades to the street in front of the White House and discarded them there as an act of ….. petulance?

The Fox Nationalists included a video (below) of this rally that was labeled “Veterans face off with Obama Storm Troopers At White House!” The reference to “Storm Troopers” (Hitler’s paramilitary wing of the Nazi Party) is rhetoric that is all too common with these right-wing extremists. In the video the protesters loudly boo the arrival of the police. You can hear them shouting chants and slurs such as “Looks like something out of Kenya,” and “It’s the Brown Shirts,” another Nazi reference.

The police, of course, are there to protect people and property from harm, behavior that the demonstrators already proved they are willing to engage in. Officers never made any aggressive moves toward the demonstrators that would have justified the bile spewed at them. And if something terrible had happened, these same abusive protesters would be clamoring for assistance from these brave public servants. It is thoroughly repulsive how these Teabaggers can go from praising first responders during natural disasters or terrorism, to vilifying them for doing their jobs during an unruly demonstration.

It is also notable that the Tea-Publican Party malcontents who caused the government shutdown are now so fixated on just one of many of the repercussions for which they previously cheered. They characteristically have chosen to focus on a symbolic outrage having to do with some senior citizen veterans being able to visit some statues in a park. Wouldn’t it be nice if they cared just as much about the children who have been locked out of programs that provide necessary food and health care? 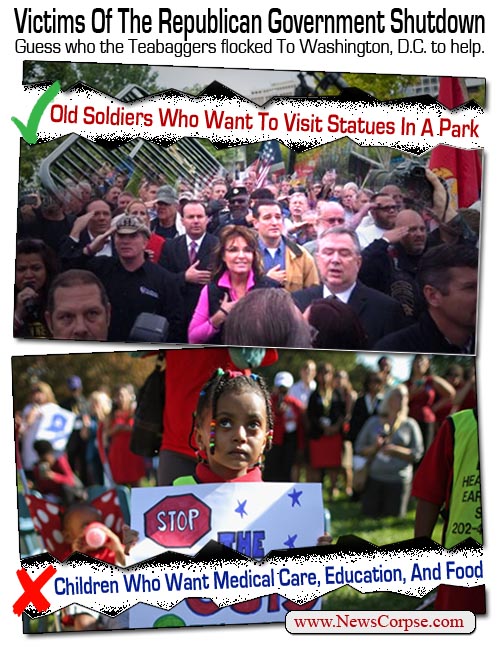 And if you thought that this weekend’s rally had something to do with veterans, or a health care plan, or government spending, you just need to listen to the words of Freedom Watch founder Larry Klayman, who was a featured speaker at the rally and said…

“We are now ruled by a president that bows down to Allah. […] I call upon all of you to wage a second American nonviolent revolution, to use civil disobedience, and to demand that this president leave town, to get up, to put the Quran down, to get up off his knees, and to figuratively come out with his hands up.”