In keeping with their knee-jerk opposition to everything President Obama does, The liars at Fox Nation posted an item sourced to NBC News with a foreboding headline declaring that “Hundreds of Thousands Lose Their Health Insurance.” 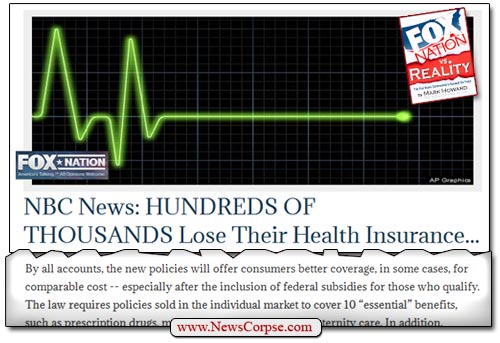 The first problem with this is that NBC News was not the source of the information Fox was referencing. This misattribution was an attempt by Fox to ding NBC, one of Fox’s favorite punching bags, as well as to pretend that a respected news source was criticizing ObamaCare. The actual source was the Henry J. Kaiser Family Foundation, a nonprofit, nonpartisan health policy research and communication organization (not affiliated with Kaiser Permanente).

More to the point, the Fox Nationalists grossly misrepresented the substance of the original article. Contrary to the overtly biased headline, the newsworthiness of the article was not that insurance companies were terminating old, non-ACA compliant plans. It was that the new plans available on the ObamaCare exchanges were both better and cheaper. In fact, the third paragraph down began “By all accounts, the new policies will offer consumers better coverage, in some cases, for comparable cost — especially after the inclusion of federal subsidies for those who qualify.” ThinkProgress did an analysis of the changing plans and found that…

“Many policies currently sold through the individual market do little to help people who actually get sick. These plans come with appealingly low monthly premiums to draw in consumers. But those supposedly ‘affordable’ rates typically mask high deductibles, big gaps in coverage, and large co-pays […] Insurance companies have been able to get away with this because they were largely unregulated before the health reform law’s passage. Now, Obamacare is changing that.”

Fox simply ignored the critical passages in the article to which they linked in favor of advancing their agenda of fear mongering about ObamaCare. They rely on the incurious nature of their audience to fail to read even three paragraphs of the articles they post. It is consistent with their efforts to frighten insurance consumers with poorly researched stories that allege exorbitant price increases, but fail to take into consideration the subsidies and tax credits for which most of the affected people will qualify. So we can chalk this up as just another lie from the folks at Fox Nation.

4 thoughts on “Fox Nation vs. Reality: Hundreds Of Thousands Get Better, Cheaper Insurance”