Rupert Murdoch’s New York Post published an exclusive report on alleged changes to the uniforms of the United States Marines. The story claimed to unveil plans to rollout new caps that the Post said would “take the hard-nosed Leathernecks from the Halls of Montezuma to the shops of Christopher Street.”

NYPost: Thanks to a plan by President Obama to create a “unisex” look for the Corps, officials are on the verge of swapping out the Marines’ iconic caps – known as “covers” — with a new version that some have derided as so “girly” that they would make the French blush.

To begin the parade of errors in this article, President Obama had nothing to do with the “plan.” The proposed uniform changes were the result of decisions made entirely within the military. Secondly, the decision has nothing to do with creating a unisex look. Only female uniforms are being considered for any changes. Male uniforms will remain the same. Finally, this is not a plot to feminize the military. The decision was driven by the fact that the company that made the women’s covers went out of business and the Corps had to find a new manufacturer. They took this opportunity to update the cover based on one worn by a two-time Medal of Honor winner from World War I.

So the New York Post got almost everything wrong in their story. They apparently did no research whatsoever to confirm the highly suspect information they claim to have received in the form of an internal memo that did not identify the source. The story then worked its way to Fox News where Fox & Friends co-host Elisabeth Hasselbeck regurgitated the error-filled article despite the fact that the Corps had already debunked it. A real reporter contacted a spokesperson for the Corps and got this statement:

“The President in no way, shape, or form directed the Marine Corps to change our uniform cover. We’re looking for a new cover for our female Marines for the primary reason that the former manufacturer went out of business. The Marine Corps has zero intention of changing the male cover.”

However, there is a bigger problem with the substance of this report than just the fact that it is completely false. The tone of the complaint is overtly disparaging toward women in the service. Why is the New York Post and Fox News using language to insult our troops by associating them with female characteristics? What is it about being “girly” that they find so derogatory? Do they regard women as inferior or substandard soldiers? Are they afraid that they will throw grenades like a girl? The whole tenor of the article is that it is bad to be female and any affiliation with that gender is presumed to be negative. 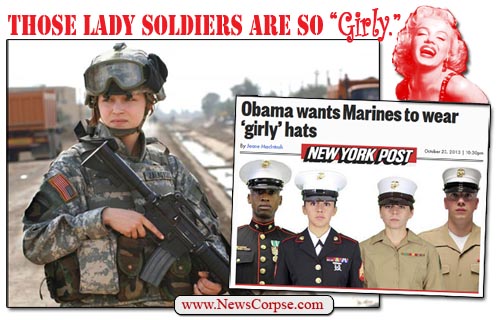 Somehow I suspect that the menfolk at the Post and Fox News would be at a significant disadvantage in a confrontation with any female Marine. Perhaps it would be a constructive lesson for the sexist cowards who spew this garbage to be placed in that situation.

Hypocritical conservatives like to boast about their support for the troops, but this is the sort of deliberate smear that exposes just how disingenuous and self-serving their hollow praise is. They are simply exploiting America’s warriors for their own political purposes. And nothing is more disrespectful than that.