The right-wing’s Fright Offensive over ObamaCare keeps getting more deranged every day. If they aren’t spreading fears of getting victimized by hackers, or the horrors of Americans voting, or the return of the Zombie ACORN, then it’s threats of ObamaCare prisons and gun registries.

News Corpse previously reported the utterly inane allegation that the ObamaCare website contained an invisible contract that granted the government an unfettered right to spy on health insurance consumers. Of course, as any freshman law student could tell you, there is no such thing as an enforceable, invisible contract. The gist of the complaint was that there was language secretly inserted into the website’s source code that could not be seen but nevertheless bound users to an agreement that they have “no reasonable expectation of privacy.” However, this “ghost” language was actually removed with the use of HTML comment tags by the site’s programmers rendering it inoperative.

The mental deficients pushing this notion are getting way too wrapped up in Halloween. Unfortunately, amongst those imbeciles is at least one member of Congress, the dishonorable GOP Rep. Joe Barton of Texas (where else?). In a hearing today investigating the shortcomings of the ObamaCare website implementation, Barton asked representatives of the software contractor about the “hidden” code that he said violated the law. With a flair for both ignorance and panic he yelped “The privacy section on the ObamaCare website says your privacy will be protected. The hidden source code seems to say, ‘just kidding.'” He later added “That’s Obamacare in a nutshell. It says one thing on the surface and says something totally different behind the scenes.”

Wrong! The hidden source code says nothing at all because — it’s hidden, and invisible text has no legal force or effect. In all likelihood, one of the programmers probably copied a block of text from a common privacy policy and then edited out the parts that don’t apply. But Barton compounded his misunderstanding by posting on his Facebook page after the hearing that the so-called hidden waiver “means it is an intentional policy decision of the Obama administration to deceive the American public.” Wrong again! 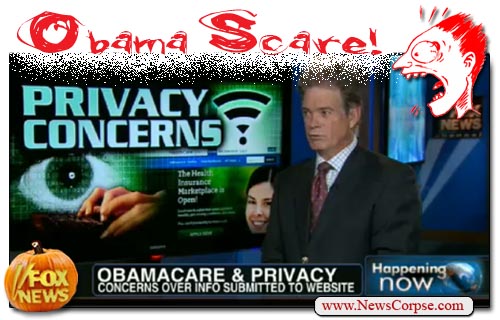 Finally, Fox News weighed in with a report by correspondent John Roberts who said that this is “another step down the rabbit hole of ‘Big Data’ […] As we’ve learned, source code in the web site’s terms and conditions states that users have “no reasonable expectation of privacy.” Roberts hasn’t learned anything at all, nor have his viewers. And apparently none of these grown men in the press or politics has as much technology savvy as a fourteen year old WoW gamer.

5 thoughts on “OBAMA SCARE: Making A Bullshit Mountain Out Of A Moronic Molehill”