In my book, Fox Nation vs. Reality, I document more than 50 examples of outright, provable lies that appeared on the Fox News community website. Obviously, no one expects an enterprise that cares so little about truth to demonstrate much integrity. However, it is still jarring when a major news organization mainlines reporting from disreputable outlets like WorldNetDaily.

WND is America’s Birther Headquarters. It’s founder and editor, Joseph Farah, has been the most aggressive skeptic of President Obama’s national origin. Farah financed a billboard advertising campaign with the message “Where’s the Birth Certificate?” And Farah’s publishing arm put out the widely ridiculed book with the same title by crackpot conspiracist Jerome Corsi. 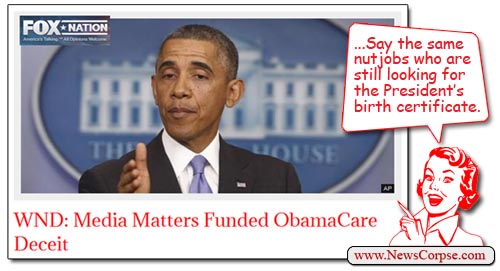 Sitting atop the Fox Nation website yesterday was a feature article by Aaron Klein, the author of the WND published book of bullcrap, Impeachable Offenses. Klein’s headline declared that “Media Matters Funded ObamaCare Deceit.” Clicking through to the WND source revealed a rehashed jumble of articles that Klein had written years ago. The centerpiece of his so-called reporting was his unsupported assertion that Media Matters had bankrolled an imagined campaign to deceive the public about ObamaCare. However, the only thing the article succeeded in revealing was the fact that a progressive think tank, the Herndon Alliance, was the beneficiary of support from a Media Matters affiliated entity, along with a couple of hundred other progressive groups. There was no evidence presented of any Media Matters role as the financier of anything having to do with ObamaCare. Neither was there any evidence of any intent to deceive. But there was an abundance of wild accusations and fear mongering about Saul Alinsky and George Soros, two of the right-wing, tin-foil hat brigade’s favorite bogeymen.

Apparently WND and Fox News found it shocking that like-minded progressive organizations would rely on one another to advance their common interests. Conservatives never do that. Unless you count the highly coordinated activities of the Koch brothers, Americans for Prosperity, FreedomWorks, Club for Growth, the Heritage Foundation, the Heartland Institute, the Competitive Enterprise Institute, the Mackinac Center, Tea Party Nation/Express/Patriots, the Franklin Center, the State Policy Network, the Family Research Council, the National Rifle Association, the Republican National Committee, [oh, I could go on] and of course Fox News.

There really is a “Vast Right-Wing Conspiracy,” and it is working feverishly to fabricate the existence of a vast left-wing conspiracy, while concealing its own nefarious activities. And Fox News, as a founding member of the VRWC, is doing its part to slander progressive groups by promoting the dishonest cretins and professional liars at WorldNetDaily who are obsessed with impeaching our gay, Kenyan, Muslim, socialist president.