Mayor Rob Ford of Toronto has consumed an enormous amount of media attention since he was exposed as an unrepentant crack smoking slimeball. In the wake of that scandalous affair on America’s northern border, Florida, in a fit of envy, has entered the sweepstakes to claim the title of “Most Depraved Politics.”

Trey Radel is a freshman congressman who won election in a conservative Florida district by running as committed Tea Party crackpot. True to form, Radel began his term in the House by advocating the impeachment of President Obama without bothering to come up with any justification for doing so.

Today it was announced that he was arrested for cocaine possession in the District of Columbia. In the customary statement of contrition that is always delivered after getting caught, Radel used a familiar excuse for his depravity:

“I’m profoundly sorry to let down my family, particularly my wife and son, and the people of Southwest Florida. I struggle with the disease of alcoholism, and this led to an extremely irresponsible choice. As the father of a young son and a husband to a loving wife, I need to get help so I can be a better man for both of them.”

Just like Mayor Ford, Radel only submitted to the sin of cocaine use because he must have been in a drunken stupor. In addition to his substance abuse problems, he had an interesting career prior to getting elected to Congress, including brokering pornographic Internet domain names. But even more interesting was his media resume:

Radel was trained as an actor and a comedian and performed improvisational work at Second City in Chicago. Radel began his working career as a journalist, working as both an anchor and as a reporter. He interned for CNN at their Headquarters in Atlanta. He then worked for the CBS affiliates in Houston and Chicago. He was a TV and radio talk show host of Daybreak, on WINK-TV & 92.5 Fox News Radio.

Fox News is deeply ingrained in this family as he is married to FOX-4 anchor Amy Wegmann. It will be interesting to see if Fox News reports Radel’s arrest on the air. A fallen Tea Party congressman ought to be big news. Fox would certainly report it if it were Democrat. Of course, Fox always has the option of reporting it but identifying him as a Democrat, a tactic they have used before. 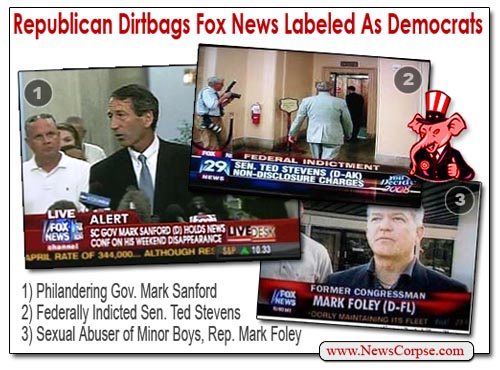