The Fox News driven War On Christmas is a peculiar conflict that only seems to flare up every year after Thanksgiving. Apparently both sides go into retreat between New Year’s Day and Halloween. But that isn’t the only peculiarity about this war. 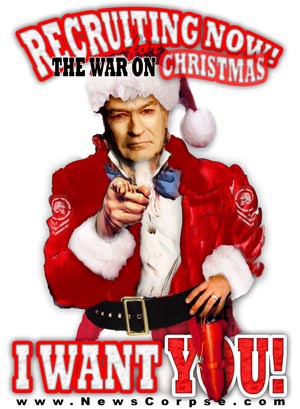 Fox News’ general in the battlefield is Wily Bill O’Reilly. He is by far the most dominant figure in the war. And for proof of that, just ask him. Not only does he take the point every year by exposing any alleged assault on a nativity scene that his staff alerts him to, he proudly boasts about the success of his warrior crusade. Just this week he declared victory, an announcement that hopefully will put an end to the seemingly endless conflagration:

O’Reilly: We challenged them! So, therefore, it isn’t a mythical war on Christmas. It’s real and we just won!

That would be a profound turning point in the Christmas Wars except for the fact that O’Reilly had previously declared victory five years ago:

O’Reilly: “The Factor’s” reporting on Christmas is one of the most important things we’ve done. The underlying assault on this federal holiday is spelled out in my book, “Culture Warrior” if you have an interest. But the bottom line is this. We won.

How many times will Wily Bill claim to have emerged victorious in the same war? Generally when you have vanquished your enemies you do not have to re-vanquish them the following year. But that’s the peculiarity of a war that is waged for ratings, profit, and the adoration of dimwitted troops bravely manning their sofas with remotes at the ready.

If that joyful expression of profit over prophet doesn’t jingle your bells you are two steps lower than Scrooge. So get with the program and join O’Reilly’s crusade for the traditional values that honor greed and corporatism. It’s a vision of the holiday season that was expressed so artfully in music by Miles Davis and Bob Dorough in this classic Christmas carol: Blue Xmas.