The ignorance that infects much of the rightist punditry has been an inexhaustible source of both frustration and humor. And no one exemplifies the pitiful state of conservatism better than the de facto head of the Tea-publican Party, Rush Limbaugh. 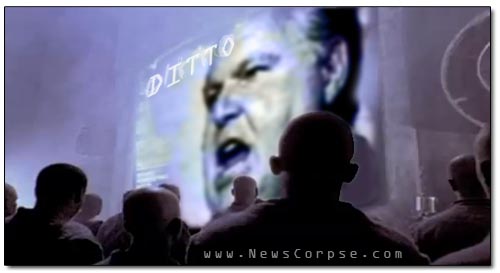 Now that much of the midwest and northeast regions of the United States have been inundated with historically frigid weather, El Rushbo has dusted off his fake degree in meteorology to explain it all to his dittohead audience. The resulting rant is so hilariously absurd that it needs little commentary to fully appreciate the depths of its dementia. So without further ado, here are some choice excerpts from Limbaugh’s Monday broadcast about the “Dreaded Polar Vortex” that he says was created by the left to “make you think winter is caused by global warming.”

“So, ladies and gentlemen, we are having a record-breaking cold snap in many parts of the country. And right on schedule the media have to come up with a way to make it sound like it’s completely unprecedented. Because they’ve got to find a way to attach this to the global warming agenda, and they have. It’s called the ‘polar vortex.’ The dreaded polar vortex.”

“Do you know what the polar vortex is? Have you ever heard of it? Well, they just created it for this week.”

“Now, in their attempt, the left, the media, everybody, to come up with a way to make this sound like it’s something new and completely unprecedented, they’ve come up with this phrase called the ‘polar vortex.'”

Exactly. They just came up with it like seventy years ago. The truth is that scientists have been studying it for decades. Here is a brief primer on the Polar Vortex that Limbaugh should have read before making an ass of himself.

“They’re in the middle of a hoax, they’re perpetrating a hoax, but they’re relying on their total dominance of the media to lie to you each and every day about climate change and global warming. So they created the polar vortex, and the polar vortex.”

“Whatever it is that keeps the polar vortex vortexed in the Arctic Circle is vanishing, and that cold air is coming to us. Normally it stays up there. But now it’s down here. How did it get here? That’s the deepening mystery. That is the crisis. That is what is man-made. Man is destroying the invisible boundaries that keeps that air up there.”

Actually, it isn’t a mystery at all. Unless you are struggling to find new ways to make your dimwitted listeners even more stupid than when they first tuned you in.

“You take a 30-year-old. To him, history began the day he was born. He doesn’t know how cold it was 70 years ago unless he’s told. He doesn’t care. He thinks what’s happening now is either the best or the worst, whatever it is, ever. Everybody thinks that. Everybody’s historical perspective begins with the day they were born,.”

Where does Limbaugh get this stuff? And how brain damaged do you need to be to actually believe it?

“If man is responsible for this cold snap, then how’s it gonna end up back in the forties and thirties in places it’s below zero today? Who’s gonna change whatever it is their doing and keep the cold air at the North Pole? Well, to me it’s a logical question. If man’s causing this cold snap, then who is the man behind the curtain that’s gonna end the cold snap, and why? Why doesn’t he keep it cold? Why doesn’t the polar vortex stay vortexed?”

Apparently Limbaugh thinks that in order for Climate Change to be plausible, there must be some guy sitting in an office behind a console with buttons and levers that control the Earth’s weather. My guess is that it’s either Lex Luthor or Montgomery Burns.

“The Democrat agenda is: ‘We’ve got to get people’s attention distracted from Obamacare.'”

Here is a brief primer on the previous issues that served as distractions from ObamaCare.

“I’m constantly searching for ways to be more persuasive, to be taken seriously, ’cause I don’t make things up. I mean, I’m not into that. I don’t want to advance myself through falsehoods. I have an agenda, too, and I don’t want to be advance it falsely. I don’t want people believing what I say if I’m lying to ’em — and, consequently, I don’t lie.”

Near the end of Limbaugh’s dissertation he quotes Lauren Friedman of Business Insider saying that “Polar vortexes, though, are nothing new.” That would seem to contradict his insistence that the whole thing was invented last week by liberals plotting to advance the Climate Change hoax. It certainly reveals that he was aware that the phenomenon existed long before this week’s weather crisis. Nevertheless, Limbaugh continues to pretend that he doesn’t lie, and he wants you to know that he is your only source for the unvarnished truth.

“Now, I’m here to assure you this is a crock, but this is how the left works, and you don’t have anybody in the media questioning this.”

Thank goodness Limbaugh is here to point out all the crocks that might otherwise overwhelm us with devious crockery. Notably, among the media that is not questioning this Polar Vortex is Fox News. They have been blanketing their network with frantic reports of “Extreme Weather” throughout this ordeal. They have correspondents bundled up like Eskimos across the affected areas corroborating the intensity of the arctic cold. So it would seem that Fox News is an accomplice of the left-wing cabal manufacturing the Polar Vortex hysteria. With a conspiracy rooted this deeply into the very center of the conservatives main media outlet, the future may prove to be very cold indeed for Limbaugh and his disciples.

[Update 1/8/2014] PolitiFact evaluated Limbaugh’s Polar Vortex rant and, contrary to his assertion that he doesn’t lie, designated it a lie of the “Pants On Fire” variety.

PolitiFact: “Limbaugh claimed the media made up the ‘polar vortex’ to bolster global warming. What the cold snap does prove, he says, is Arctic sea ice is not melting — that global warming is a hoax.

“Climate scientists told us his rant is wildly misinformed.

“The polar vortex has been a part of science for decades, and it certainly does not prove that sea ice is not melting.”

PolitiFact did not address the potentially catastrophic environmental hazard that would occur if Limbaugh’s super-sized trousers were actually ablaze. Goodbye ozone.

8 thoughts on “Fun With Rush: Limbaugh Explains How The Dreaded Polar Vortex Was Created By Liberals”