The troubled rollout of the website for the Affordable Care Act (aka ObamaCare) has been a persistent irritation for the Obama administration. This despite the fact that many of the metrics used to measure the program’s success have been drifting into positive territory. For instance, millions of previously uninsured Americans now have coverage for the first time. About 2.2 million have enrolled via the state and federal exchanges, which is about two-thirds of the number that was set as a benchmark by the Congressional Budget Office. Millions more have qualified for Medicaid or have been added to their parent’s plans, both opportunities made available by the ACA.

While the media maintains a relentlessly negative tone when reporting on the issue, the American people still have a favorable view of ObamaCare. Consequently, Fox News and other conservative players are pressing a strategy that alleges that anything the White House says or does that is not about ObamaCare is a deliberate attempt to distract from the issue. Should the President have the audacity to perform the duties of his office, his critics accuse him of obfuscating for political purposes. This means that he cannot move forward on his previously stated agenda on the economy, on the minimum wage and unemployment, on immigration reform, on the environment, or on foreign affairs and diplomacy, without being accused of orchestrating a distraction from ObamaCare.

Fox News, as usual, is taking the lead on this tactic by reporting that Obama’s recent talk about income inequality is just such a distraction, even though he has been talking about that throughout his presidency. Fox raised the distraction allegation on the air with an interview of former Bush crony, and current GOP SuperPAC-Man, Karl Rove. They also made it the headline feature on their website, adding the angle of class warfare to the charge of distraction. For the record, class warfare has been raging for years in this country. It was started by the rich and any objective appraisal of the situation would have to conclude that the rich are still winning. 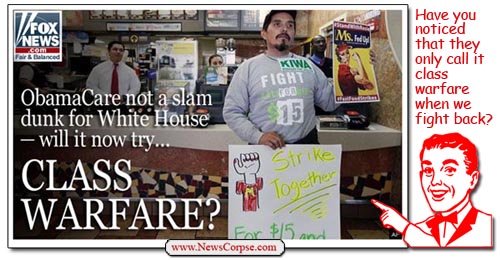 The recent talk of income inequality being a ploy to shift focus from ObamaCare is hardly the first issue that has been exploited for that purpose. The media has made the same stale accusation for a variety of issues that are generally considered to be a part of any president’s responsibility. For instance:

And my personal favorite…

It doesn’t seem to matter what this White House does. If it doesn’t involve ObamaCare then it is a distraction from it. Of course, if they were to focus exclusively on health care, their critics would then accuse them of neglecting all the other critical duties of the presidency. This is the sort of shallow and partisan politicking that is engaged in by people who don’t have substantive points to make. Because Republicans have no agenda for the nation other than repealing ObamaCare, subjugating women, minorities, and gays, expanding the proliferation of guns, and cutting taxes for the rich, they are forced to resort to these lowbrow methods of attacking the President for doing his job.

Be prepared for more of this in the coming election year. Already we have a GOP congressman predicting that Obama will start a war in an effort to deflect from ObamaCare. It’s only a matter of time until reports about Sarah Palin’s alien love child are making headlines at Fox News as just another attempt by Obama to distract Americans from the health care reform that they presently view favorably.