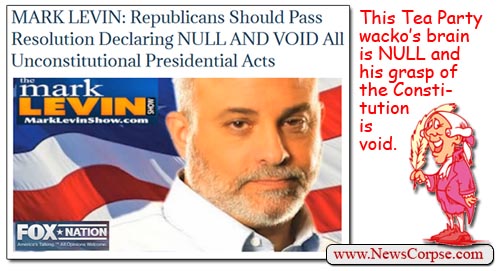 In his response to President Obama’s State of the Union speech, Levin went berserk over what he perceived as a tyrannical usurpation of power by the President. In Obama’s speech he castigated our do-nothing congress for its relentless obstructionism and gave them this rather diplomatic warning:

“I’m eager to work with all of you. But America does not stand still – and neither will I. So wherever and whenever I can take steps without legislation to expand opportunity for more American families, that’s what I’m going to do.”

That’s all it took for the the right-wing outrage machine to get fired up and begin a frantic crusade against what they believe to be an unprecedented overreach. Of course, the truth is that every president has and uses his executive authority to proceed with initiatives that Congress fails to act upon. It is consistent with the constitutional jurisdiction of the executive branch of government, but that hasn’t stopped Republicans from bellowing about dictatorship.

Mark Levin’s post-speech rant took the form of advice to the Republicans in congress. He concluded that they were toO weak to do what he really wanted – which is to impeach Obama for some reasons he didn’t bother to specify. So he proposed an alternative in the form of a congressional resolution:

The Stupid Party (aka the Tea Party, aka the Republican Party) strikes again. First of all, no act by the President, or the Congress for that matter, is unconstitutional until the Supreme Courts says it is. The House of Representatives has no authority to unilaterally designate something the president does as unconstitutional. Secondly, any acts declared unconstitutional by the court are already null and void and don’t require a congressional resolution to be recognized as such. Nor is a prohibition of funding necessary for an act ruled unconstitutional. Since it cannot be carried out, no funds would be allocated to it.

What is laughably pathetic about Levin’s resolution is that it would probably fail the test of constitutionality itself were it ever enacted and challenged in the court. As noted above, the legislative branch cannot rule on the constitutionality of executive actions. And even more idiotic is the fact that Levin doesn’t seem to comprehend that his proposed law could not be enacted without the President’s signature. Does Levin think that Obama would sign this asinine bill?

So what does Fox News do with this utterly delusional rant by a crackpot who clearly doesn’t understand constitutional law? Well, they feature on their Fox Nation website along with all the other blatant lies and disinformation. And thus, the cycle of stupidity continues to flow from wingnut pundits to dishonest news outlets to an audience of willful dimwits.