By now no one should be surprised that Fox News, and the congregation of Tea Party conservatives they represent, would oppose legislation intended to benefit America’s working class. Fox has consistently fought against reforms that make it possible for people to take care of themselves and their families and to advance economically. Any policy that is viewed by their corporate benefactors as negative to their profit margins, or that might adversely impact their multimillion dollar compensation, is attacked by Fox News, and the rest of the rightist press, as anti-business or even socialist.

That is precisely the case with the current debate over whether to increase the minimum wage, which has not been done in seven long years. Raising the minimum wage is generally seen as politically popular, so in order to derail it, opponents have to pitch tortured arguments that have very little backing by knowledgeable, non-partisan economists. But the tactic being used by Fox today is particularly devoid of reason and is wholly unethical, even by the standards of Fox News. 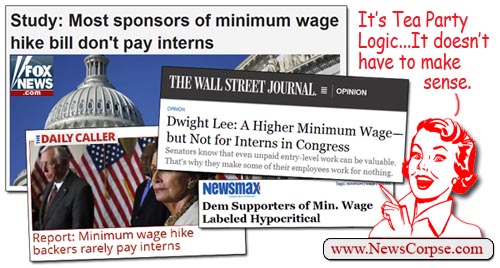 In an effort to manufacture a false claim of hypocrisy, Fox News is presenting an absurd comparison. Their story asserts that “Most sponsors of minimum wage hike bill don’t pay interns.” So F**king What? Internships are temporary positions made available to students so that they can get some real-world experience in their field of study and credit for school. They are not intended to be employment for personal gain. They serve the same purpose as the classroom at their school, and they don’t get paid for that either. Internships generally have a fixed term of a few weeks during the summer or other school hiatus. To compare that to jobs where people are working in order to support themselves and their families makes no sense whatsoever.

That said, there may be some good arguments for compensating interns, particularly in business where the enterprise has sufficient resources to do so. But to assert that members of Congress who support raising the minimum wage are being hypocritical for allowing students to get an up-close look at how government operates is simply a wild and irresponsible attempt to obstruct progress on policies that bring tangible relief to struggling Americans, as well as a substantial boost to the economy.

What makes this story even more repulsive is that Fox is citing data from a disreputable source with a vested interest in the welfare of the corporations it exists to serve. According to Source Watch…

“The Employment Policies Institute (EPI) is one of several front groups created by Berman & Co., a Washington, DC public affairs firm owned by Rick Berman, who lobbies for the restaurant, hotel, alcoholic beverage and tobacco industries.”

So this organization is directly tied to the industries who are the most virulently opposed to a minimum wage increase. That should cause a legitimate news agency to steer shy of them if they are interested in unbiased information. But it doesn’t dissuade Fox, and a bevy of other wingnut “news” outlets, from eating up the self-serving tripe.

As if that weren’t bad enough, Berman & Company is also notorious for feathering its own nest. The bulk of the funds received by the organizations under its control goes right back into Berman’s pocket. For instance, the Employment Policies Institute reported $1,629,930 in total revenue for 2011, and $2,103,896 in total expenses. But despite running a half million dollar deficit, it paid Berman more than a million dollars that year. That alone should cast doubt on the quality of the economic advice they might dispense.

What we have here is a lobbyist who created a fake think tank so that he could raise funds from corporations to advocate on their behalf – and against the interests of average Americans. Then this fake think tank gets fake news enterprises (like Fox) to disseminate their tendentious opinions. That’s how the right-wing media machine poisons the public debate on important issues. And this particular article got spread to the the Wall Street Journal, the Daily Caller, Newsmax and other conservative mouthpieces.

To counter that, here is some more information on the benefits of raising the minimum wage. These articles explain in more detail why the nation should move forward with this legislation:

Economic Policy Institute: Low-wage Workers Are Older Than You Think