If there is one thing we can count on from Fox News, it is a steady supply of commentary that violates the standards of ethical journalism and provides a rich source of raw material for mockery and/or debunking. Whether it is Bill O’Reilly declaring that his own interview of President Obama will “go down in journalistic history,” or the Fox “Psycho” analyst, Keith Ablow, peering into the mind of the President (and everyone else), Fox keeps America’s media watchers and comedians busy. Today is no exception as we embark on a deconstruction of remarks made by Fox News anchor Jenna Lee. 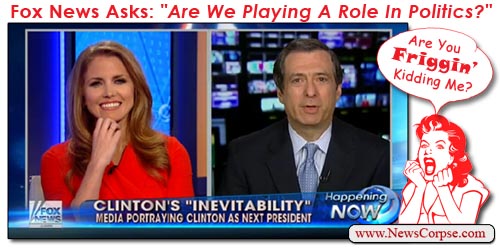 In a segment with Fox’s Media analyst, Howard Kurtz, the topic was whether the media is setting up the “inevitability” of Hillary Clinton as the Democratic nominee for president in 2016, and even as the next president. Of course, Fox News itself has been amongst the most hyperactive media outlets obsessing over the, as yet non-existent, Clinton campaign. But the interesting part of the discussion came when Lee had a peculiar inquiry for Kurtz which she set up thusly:

“The purpose of the media in a democracy is freedom of the press. We want to make sure that voters are informed on issues so that they can actively participate in democracy. I believe that. In this way that we’re already looking ahead at the election, are we serving our purpose as journalists? Are we productive members of this freedom of the press and democracy? Or are we playing a role in politics that maybe we should not be playing?”

Let’s just skip over the contorted linguistic absurdity that freedom of the press is the purpose of the media, and go right to Lee’s insistence that she wants to “make sure that voters are informed.” To the contrary, everything that Fox has done for the past seventeen years has served to make sure that voters are stuffed to the brim with disinformation, right-wing propaganda, and lies. And if Fox is so concerned with people being able to “actively participate in democracy,” then why do they promote voter suppression policies so aggressively?

But the real stunner came when Lee asked if Fox is “playing a role in politics.” Are You Friggin’ Kidding Me? It’s impressive that a Fox News anchor can ask that question with a straight face. A network that was bankrolled by an international propagandist (Rupert Murdoch), built by a Republican media strategist (Roger Ailes), and staffed by partisans both behind and in front of the camera, is obviously playing a role in politics.

Fox News serves as Media Central for conservative pundits and politicians. They help them to shape their messages, to organize, to fundraise, and to gain invaluable exposure to the public. So yes, Jenna, you are playing a role in politics that maybe (definitely) you should not be playing. And you know it. And you are not going to change, because it is what you and your colleagues were hired to do. So stop asking such stupid questions.

7 thoughts on “AYFKM? Fox News Asks “Are We Playing A Role In Politics That Maybe We Should Not Be Playing?””