The rightist wing of the Republican Party (aka Tea Party) has never been shy about making fools of themselves, particularly with regard to popular culture. An advertisement by Cheerios that featured a biracial family was a recent example of this as the conservative wackos went ballistic over a tweet that correctly predicted they would hate the ad. Following that, Coca-Cola incited wingnut rage by committing blasphemy with a multilingual rendition of “America the Beautiful” during the Superbowl.

Not content to growl menacingly at heart warming celebrations of America’s diversity, Tea Party factions are now claiming that their bigoted tantrums have won them a victory over the liberal multiculturalists in charge of the international soda conspiracy.

Breitbart News is reporting that Coke has “surrendered” to the Tea Party after complaints that their commercial offended right-thinking conservative xenophobes who are unable to tolerate people who show their love for America in a variety of languages. 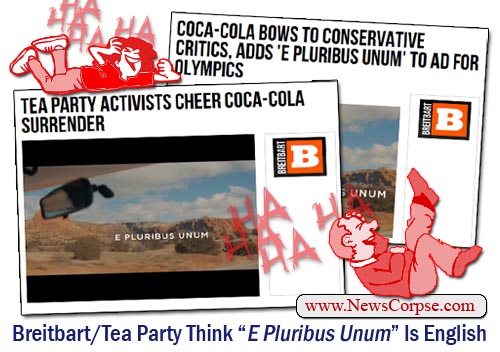 It is the evidence of this surrender that is so strikingly preposterous. The Coke ad was reworked a bit when it was broadcast during the opening ceremonies of the Olympics. A short segment was added to the beginning of the ad with the words “E Pluribus Unum. Out of many, one.” It is that modification that the BreitBrats are asserting is proof that their vilification of human harmony was successful. So let’s get this straight. Coke, they said, “bowed to conservative critics” who insist on English-only by inserting a short phrase in — Latin.

These are the same rocket scientists who carried signs to their Tea Party rallies saying “Government hands off of my Social Security.” They are the same people who pledged to burn their ObamaCare cards (which do not exist). And now they think that appending a Latin phrase onto an ad is a testament to their strength in getting a cold corporation to acquiesce to their demands for an English-centric America.

All I can say is ach du lieber. These people are obviously loco. If they had any esprit de corps with their fellow Americans they wouldn’t show such disdain toward them, capiche? After all, these are the villains upon whom they are showering their hate: