From the very first days of the Affordable Care Act (aka ObamaCare) Fox News and other right-wing media have work their butts off trying to frighten people away from it. Their ultimate goal is to sabotage the program by suppressing participation. But with more than three million enrollments, and millions more covered by Medicaid or parental plans, the Fox strategy appears to be failing miserably.

That, however, has not dampened their resolve to do damage to the program and the millions of Americans who are already benefiting from it. Recently an ad that was produced by the Koch brothers-financed Americans for Prosperity, featured a Tennessee woman who suffers from Lupus. In the ad Emilie Lamb claims that she was forced from a state-sponsored insurance plan (which conservatives usually oppose) that cost her $57.00 a month, to an ObamaCare plan that cost $373.00. On the surface that sounds pretty awful. But as usual, there is much going on just below the surface. 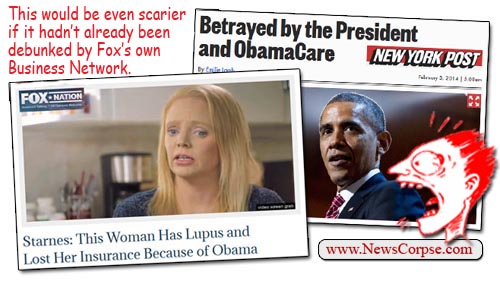 Consumer Reports health care expert Nancy Metcalf, writing for the Fox Business Network, added some necessary context to this story. Her article titled “Don’t be fooled by another ‘Obamacare horror story,'” spells out why Lamb’s claim that her previous policy satisfied her needs may not have been entirely true. For instance, Lamb’s CoverTN plan had a cap of $25,000, but Metcalf notes that most Lupus patients spend far more than that each year for routine medication and doctors visits. If she has a flare up or requires treatment for more severe symptoms, Lamb’s medical expenses could easily exceed six figures. Metcalf writes that…

“Under her old plan, they would not have been covered. Under her new plan, they will be. I used HealthCare.gov’s window-shopping feature to identify what she purchased: a Platinum plan with a $1,500 out-of-pocket limit. There is no deductible, 25 percent coinsurance for pretty much all services, and, most critically, no upper limit on what the plan will pay out for medical care. So if she ever has a complication of her disease, or needs one of those expensive drugs, the most she’ll have to pay out of pocket in a year is $1,500. The insurance company will pick up the rest of the tab, no matter how costly.”

One of the incentives for implementing health insurance reform was the number of bankruptcies filed by working Americans whose insurance failed to cover them after they had the audacity to get sick. While Ms. Lamb is understandably disturbed by the higher premiums she is facing now, it is preferable to a financial (and health) disaster should her disease take a turn for the worse. In addition, the evidence actually suggests that Lamb’s costs will be lower under ObamaCare due the $1,500 annual out of pocket maximum, and the absence of any lifetime cap. Under her previous policy she would be responsible for much more over time.

The Koch brothers and Fox News have been relentlessly hyping this story as proof that ObamaCare has not served patients like Lamb. They have featured it on the air with reports that provide no opinion counter to that of the Fox angle. They have posted it on their lie-riddled community website, Fox Nation. They published an op-ed by Lamb in Rupert Murdoch’s New York Post. So it is somewhat curious that they permitted their hype to be debunked on their little-viewed Fox Business Network website.

This may be their way of buying a little insurance of their own. When the bottom falls out of their propaganda machine, they can claim that they were “fair and balanced” after all. Even though their blurb on the FBN blog can never match the magnitude of their attacks on ObamaCare throughout the rest of their media empire. And don’t expect to see Nancy Metcalf providing Fox News viewers with her analysis anytime soon. She’s not likely to be invited onto the O’Reilly Factor given the factual nature of her reporting.

To Fox, it’s best to keep people like Metcalf segregated to the FBN web ghetto so the Foxbots aren’t exposed to the sort of truthful information that contradicts conservative spin and rattles right-wing media.