Remember when Barack Obama was campaigning for president and Fox News tried to shackle him to anyone they thought would damage his reputation? Bill Ayres, who was barely an acquaintance, turned into a terrorist that Obama was “palling around with.” Rev. Jeremiah Wright became a daily fixture on the Fox News Channel consuming more airtime than the actual presidential candidates. And others, from Louis Farrakhan to Ludacris, were presented as villains that Obama was obligated to renounce, despite the fact that he had nothing to do with them and they were not a part of his campaign.

Which brings us to 2014 and the utterly reprehensible Ted Nugent, who recently called Obama a “subhuman mongrel.” That’s the least of the disgustingly hostile remarks that Nugent has spewed at the President and other targets of his sickly wrath. Yet Nugent was embraced by Greg Abbott, the leading Republican candidate for the governorship of Texas, who even shared the stage with him to accept his endorsement.

When this twisted relationship came to light, some in the media properly put it in context with inquiries about whether it was appropriate for a gubernatorial candidate to link arms with a vulgar, racist, misogynist, pedophile. But one network maintained complete silence, ignoring the controversy entirely. That is until after Nugent issued what may be the most starkly non-apology apology ever made:

Nugent: I do apologize – not necessarily to the President – but on behalf of much better men than myself, like the best governor in America, Gov. Rick Perry. The best attorney general in America, God, just think of America had an attorney general as great as Greg Abbott, like we do here in Texas. So on behalf of those professional politicians, and those who put their heart and soul into representing We The People so actively, like the people I just mentioned […] I apologize for using the street fighter terminology of subhuman mongrel instead of just using more understandable language such as violator of his oath of the Constitution. The liar that he is.

It can hardly be considered an apology if it expressly excludes the person who was the target of the original attack. Nugent was only sorry for the wingnut politicos who suffered due to their association with him – which was really more their fault, than his. Nobody forced them to accept his advances. Likewise, an apology doesn’t ordinarily include additional personal accusations of lying and treason.

So after ignoring the story when it first broke, and then pretending that Nugent’s apology was even remotely sincere, Fox News addressed the matter again on Howard Kurtz’s Media Buzz. It was a brief segment near the end of the program that only peripherally mentioned Greg Abbott. To Fox News the meat of the story had something to do with a dispute with CNN. 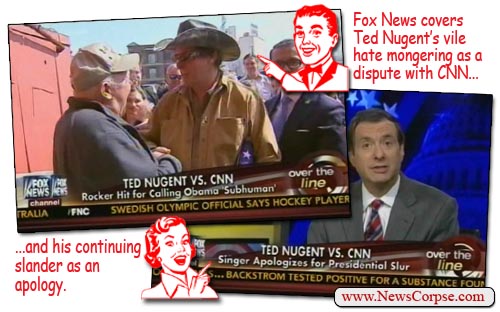 Shameless self-promotion:
Get the acclaimed ebook Fox Nation vs. Reality today at Amazon.

Notice the lower-screen graphics that label the story as “Ted Nugent vs. CNN.” It isn’t Nugent vs. Abbott, or Nugent vs. Obama, or Nugent vs. Decency. Somehow Fox squeezed out an angle that cast the story as a dust up with a competing news network. This is not an incidental point. A team of Fox editors and producers had to have had a meeting to hash out this preposterously skewed perspective. They must have begun with a determination to avoid allowing the story to negatively impact Abbot, or others with whom Nugent has been affiliated, including Ted Cruz, Scott Walker, and Rick Perry. Then they brainstormed a way to deflect the muck onto a common enemy. Lookout “liberal” media.

Once again Fox News has demonstrated that they are more interested in protecting their allies and attacking their enemies than they are in informing their viewers. The deliberation that had to have been mustered in order to concoct this nonsense illustrates just how hard they work at being deceptive and unethical. And all that hard work pays off in an audience of blindly loyal dimwits with the same ignorant incivility as Nugent.