This week the Supreme Court heard a case brought by the arts and crafts retailer Hobby Lobby. The company seeks an exemption from the mandate in the Affordable Care Act (aka ObamaCare) that requires employers to offer insurance plans that include coverage for contraceptives. The basis for their request is that they are a “Christian” enterprise and that they believe that certain methods of contraception are de facto abortion.

The problem with their legal argument is that science does not regard contraception as abortion, so the belief of the company’s owners is factually false. What’s more, they are asserting that a corporation can have a religious affiliation just like a person. That’s a strained proposition unless you believe that a corporation also has a soul, is capable of sin, and is subject to divine judgement. Do good corporations go to Heaven?

However, even if we were to accept their assertion of a religious objection to the mandate, Hobby Lobby can cannot seriously claim to have a spiritual conflict with the law as regards contraception, or even abortion. That’s because, despite the company’s owner saying that “Being Christians, we don’t pay for drugs that might cause abortions,” their business does engage in practices that violate their professed beliefs. 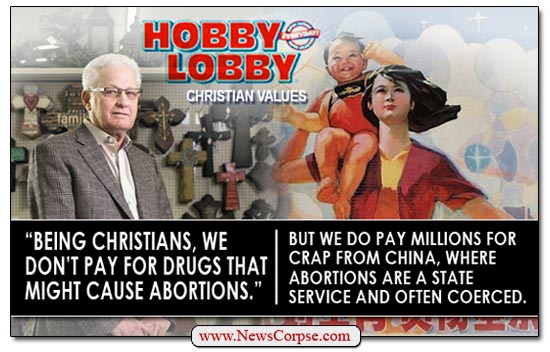 Hobby Lobby pays millions of dollars to stock their shelves with cheap products made in China, a country where abortion is legal and is even provided by the government for free – when they aren’t forcing it on women who want their babies. It is impossible to accept that the company is unconditionally opposed to a voluntary form of preventive health care that obviates the need for an abortion, while supporting a system that encourages abortion outright. If Hobby Lobby can do business with China when the profit motive compels them to, they cannot simultaneously pretend that an American woman having access to an insurance policy that includes coverage for contraception is some sort of abomination against their Lord.

Hobby Lobby’s hypocrisy, of course, is not the only reason they should lose this case. It would be frightening if the Supreme Court ruled that a corporation can have a religious belief. That would set the stage for any business to discriminate against employees for anything from race or sexual orientation to facial hair or consumption of pork. It would enable some companies to seek an exemption to ObamaCare if they believe that only faith healing is in accordance with their religion.

For Republicans, and their PR division, Fox News, to cheer on the Hobby Lobby case represents a severe departure from their professed principles. While they falsely allege that ObamaCare allows the government to come between the patient and the doctor (in fact, the government is merely attempting to prevent insurance companies from doing so), they are embracing a ruling that would give that power to every corporation.

Permitting businesses to dictate what sort of health care their employees can have is not an expression of the individual liberties that conservatives pretend to favor. And it’s even more offensive when corporate high priests impose their religious beliefs on the people who work for them. Especially when those beliefs are discarded in order to increase profits.